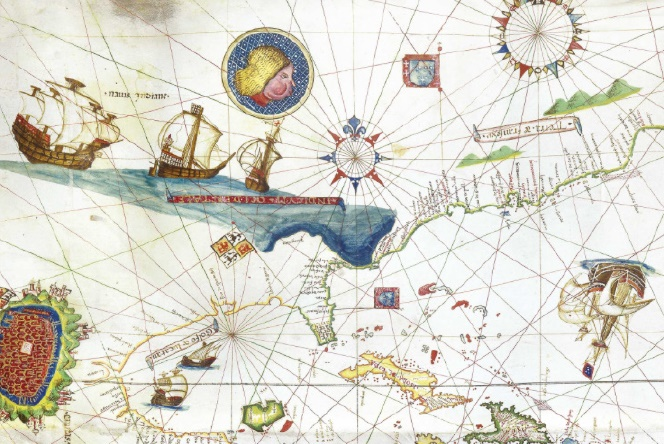 The most expensive map ever offered on the open market could bring $10 million in New York next week.
The hand-painted vellum map was created in 1531 by Italian cartographer Vesconte Maggiolo and offers the first-known depiction of New York Harbour.

It was completely unknown to experts until 1983, when it was then acquired by an English collector from a Swiss aristocratic family, and was finally recorded in 1996.

The price of $10 million would see it set a record as the most valuable map ever publically sold. It would also equal the record for any map, matching the price paid in 2005 for the Waldseemüller map – featuring the first naming of the American continent – which currently resides at the Library of Congress.

"In terms of [the] general art world, this is actually inexpensive," dealer Daniel Crouch told Bloomberg. "It’s very upsetting to discover that a Jeff Koons sells for multiples of this."

The map depicts Giovanni de Verrazzano’s first voyage to the new world in 1524, when he became the first European mariner to anchor in New York harbour.

During a later expedition in 1528, Verrazzano landed on an island near Guadeloupe, jumped from his boat to greet the natives, and was promptly killed and eaten by cannibals as his crew watched on in horror from their nearby ship.

Although the map does indeed depict the entire world, it is also understandably inaccurate. North America was believed to be a thin strip of land with Asia laying just to the West; a channel separates North and South America; and India is filled with imaginary kingdoms.

The beautifully decorated map also features depictions of elephants, dragons, camels and unicorns, along with mythical ruling ‘Kings’ of Africa such as King Solomon and Prester John who never actually existed.

TEFAF (The European Fine Art Fair) will make its own first journey to New York next week, and takes place at the Park Avenue Armory on October 22-26.