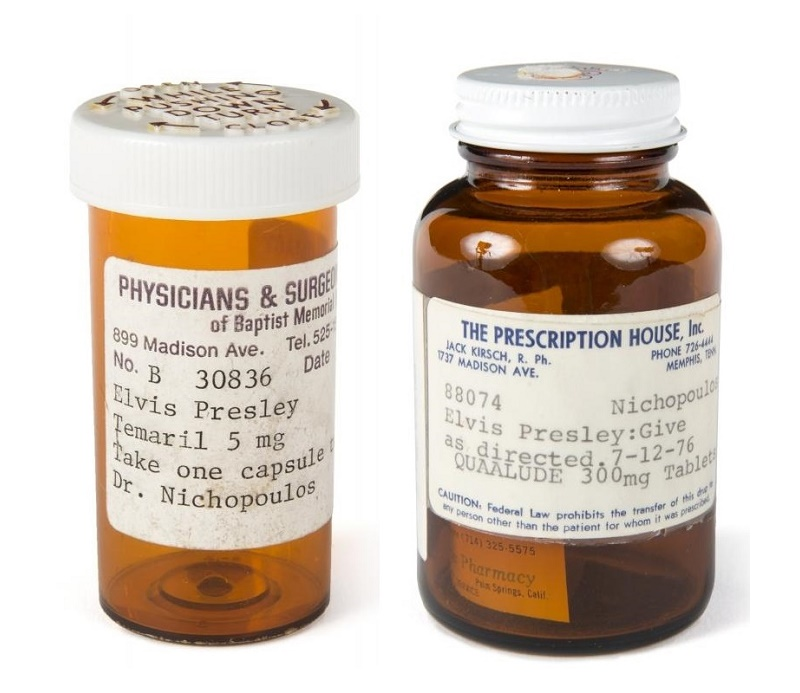 Prescription pill bottles and X-rays from the final years of Elvis Presley’s life are up for auction this month at Julien’s.
The X-rays and prescription bottles originate from the collection of Dr. Elias Ghanem (1940 – 2001), a Las Vegas physician who treated also celebrities such as Tom Jones, Liberace and Johnny Cash.

Ghanem originally worked in the emergency room at the city’s Sunrise Hospital, but his life changed forever when he got a call from a singer with a sore throat.

It turned out to be Elvis Presley, who was performing at the Las Vegas Hilton, and he quickly became Presley’s ‘go to’ guy. &nbsp;

His relationship with Elvis was highly lucrative, and the always-generous King presented him with cars, watches and expensive jewelry for his services.

Ghanem became a doctor to the stars, treating the likes of Tom Jones, Liberace, Ann-Margret, Johnny Cash, Raquel Welch and Glen Campbell as they passed through town. "They always get sore throats," Ghanem once said. "We call it Vegas throat."

At that time Presley had less than a year to live, and his physical condition was deteriorating rapidly.

He was known to suffer from high blood pressure, liver damage and an enlarged colon, all aggravated – and possibly caused – by his addiction to prescription drugs.

The sale also includes three empty pill bottles which Ghanem retrieved from Elvis during visits, estimated from $4,000 up to $8,000 each.

Each of the bottles had contained addictive drugs such as Hycomine, Temaril and Quaaludes, and all had been prescribed by the infamous Dr George Nichopoulos, otherwise known as ‘Dr Nick’.

At the time of Presley’s death in August 1977, a toxicology report showed he had 14 different prescription drugs in his system.

And a damning report revealed that, in the first eight months of 1977 alone, Dr Nick had prescribed Elvis more than 10,000 doses of sedatives, amphetamines and narcotics.

Together, the pill bottles and X-rays paint a tragic portrait of Elvis’ final days, as he battled with drug addiction, illness and exhaustion.

But for fans who want an intimate piece of the King, these morbid artefacts can only bring them closer to their hero – whose legacy as the King of Rock and Roll remains, despite his many flaws.

The Music Icons sale takes place at Julien’s Auctions on May 20.