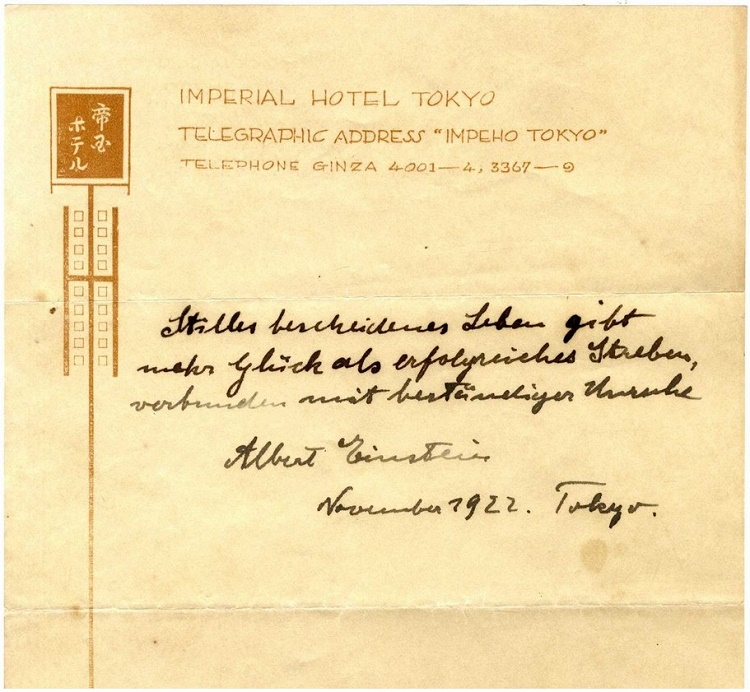 A simple handwritten note in which Albert Einstein describes his secret to happiness has sold for almost 200 times its estimate in Israel.

Einstein originally wrote the note in November 1922, during a lecture tour of Japan.

Whilst initially travelling from Europe, he was informed by telegram that he had been awarded the Nobel Prize for his service to theoretical physics.

By the time he arrived in Tokyo, news of the award had swept ahead of him, and he was greeted by huge crowds wherever he went.

Einstein was impressed by the publicity, but was also uncomfortable with being the centre of such attention.

During his stay at the Imperial Hotel in Tokyo, a messenger delivered something to his room, and Einstein found himself without a tip to offer.

Instead, he quickly scribbled two notes and gave them to the messenger.

The first contained Einstein’s theory on how to live a happy life – perhaps inspired by the chaos of his new-found fame:

The second note was a single line, but one that surely inspired Einstein’s perseverance during the earliest days of his career:

Einstein suggested to the messenger that he should hang on to the notes, as their value might increase in the future.

Like many of the predictions he made throughout his career, this one was right on the money.

When the hammer fell, an anonymous European collector claimed their prize for an incredible final price of $1,560,000.

The second note also soared above its original estimate, eventually selling for $240,000. 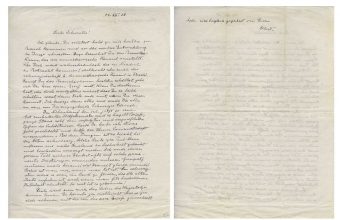