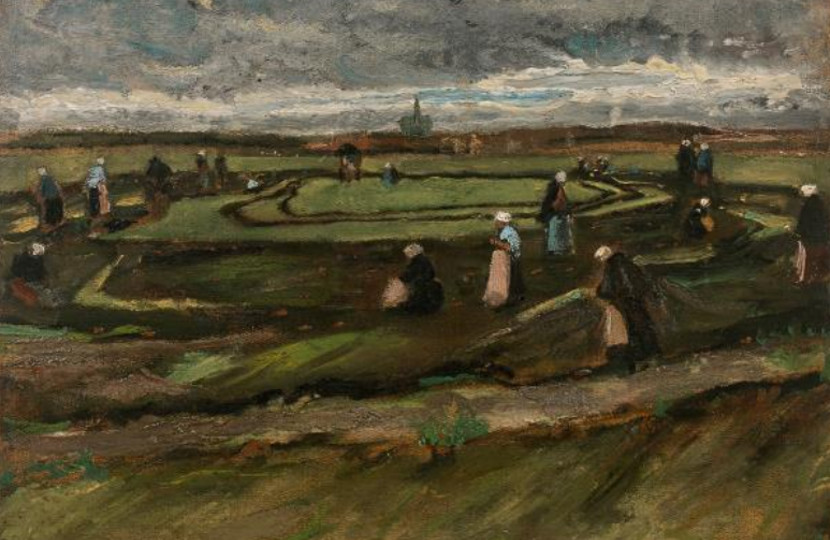 Artcurial has auctioned an early landscape painting by Vincent van Gogh for $8.2m.

Raccommodeuses de filets dans les dunes (Fishing Net Menders in the Dunes) dates to 1882, when Van Gogh was just 28. It made $8.2m at the June 4 sale in Paris.

Van Gogh began experimenting with drawing in 1881 and discovered he had a natural aptitude for it. In January 1882 he moved to The Hague – where his cousin (the realist painter Anton Mauve) gave him an informal tutoring in paint and watercolour.

Fishing Net Menders in the Dunes, from August 1882, is the sole landscape Van Gogh painted during this part of his early career.

In a letter to his brother Theo, dated that same month, Van Gogh writes of witnessing this scene in the town of Scheveningen: “The grass is relatively quite green – and the nets are deployed in enormous circles, creating deep tones on the floor, in black, green or reddish gray.

“On this dark ground, women in white caps and men, sitting or standing and some even walking about as strange shadows, hung or mended the nets.

“In itself the scene was striking, as typically dark an austere as the finest portrayal of anything we could imagine from Millet, Israels or Groux. Above this landscape, a simple gray sky with a clear band across the horizon. Despite the rain showers, I have made a study on a sheet of oiled cloth.”

The strong result can be chalked up, in part, to this being one of Van Gogh’s earliest landscapes. It’s executed in his distinctive style, which he would develop over the next few years. Also worth mentioning is the fact that few Van Gogh paintings head to auction these days, as most have long been ensconced in the world’s great galleries. The record is $82.5m, paid for his Portrait of Dr Gachet in 1990.