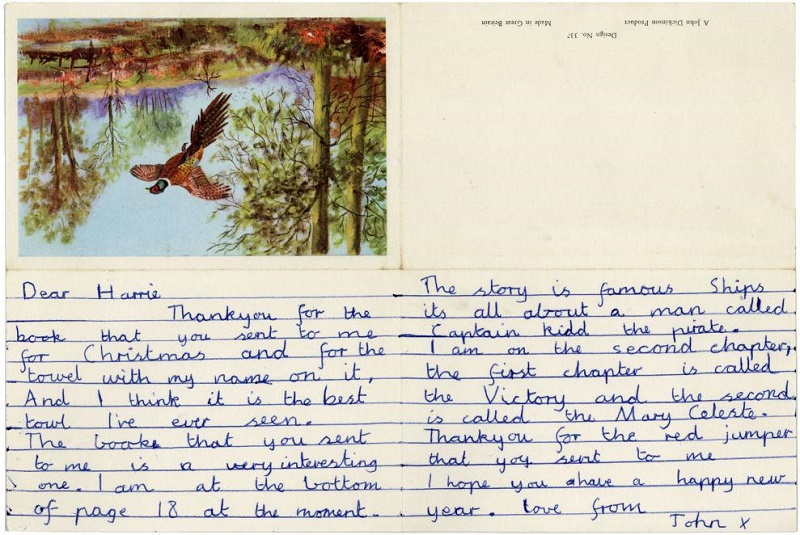 The earliest-known letter ever written by John Lennon is heading to auction this month.
The childhood letter, written when Lennon was just 10 years old, will cross the block as part of Tracks Auctions’ online sale of Beatles and Rock ‘n’ Roll Memorabilia.

The thankyou letter, which Lennon wrote to his aunt Harriet during Christmas of 1951, reads:

Thankyou for the book that you sent to me for Christmas and for the towel with my name on it, And I think it is the best towel I have ever seen.

The book that you sent to me is a very interesting one. I am at the bottom of page 18 at the moment. The story is famous Ships its all about a man called Captain kidd the pirate.

Thankyou for the red jumper that you sent to me.

I hope you have a happy new year. Love from

Lennon’s Aunt Harriet originally lived in Woolton, close to where he lived with his Aunt Mimi. She had originally lived in Egypt with her husband, engineering student Ali Hafez, but returned to England when he passed away and re-married army officer Norman Birch.

The letter is the earliest handwritten John Lennon letter ever offered at auction, and comes with an estimate of £30,000-£40,000.

Further Beatles highlights from the sale include two rare posters: one for a Beatles performance in Gothenburg, Sweden dated October 26, 1963, estimated at £16,000-£20,000; and another rare example from November 1961, promoting a concert in Brighton featuring the Beatles alongside Ringo’s original band Rory Storm and the Hurricanes, valued at £15,000-£20,000.

The sale also features an electric guitar played by Paul McCartney, during a 1968 recording session with Drew and Dy at Trident Studios in London, estimated at £4,000-£6,000.

Online bidding begins on March 24, and runs until April 4.