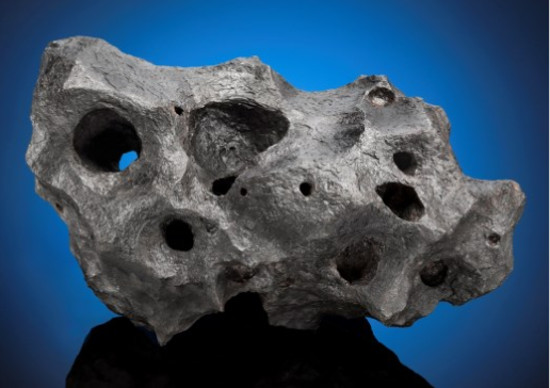 How much would you pay for a 70 pound Canyon Diablo meteorite?

If it’s anything less than $237,500, you would have missed out in Christie’s online-only meteorite sale, which closed yesterday.

The enormous lump of space iron was found in the Barringer Crater in Arizona, one of few craters big enough to have its own visitor’s museum.

It’s one of the few rocks remaining from the 30 tonne asteroid that fell to Earth around 49,000 years ago.

The energy unleashed was equivalent to 100 atom bombs, enough to blow out 175m tonnes of rock and transform much of the interior of this specimen into black diamond.

The holes that run through it were caused by the heat of Earth’s atmosphere and widened by the weathering effect of millennia in the desert.

This specimen features seven, which Christie’s described as “perhaps the most of any single iron meteorite”.

That’s partly the reason for the extraordinary result.

The other is the meteorite’s sculptural good looks, described as resembling a work by the British modernist Henry Moore.

As you might expect, meteorites take a severe pounding on their way to the ground, so aesthetically pleasing specimens are rare and highly prized.

Consignor Darryl Pitt told CNBC: “Think of it as the quintessential American meteorite.

“This one was really unusual. Most of them are highly angular, but this one has a gently curved surface…

“A few years from now, it’s going to be worth twice as much.”