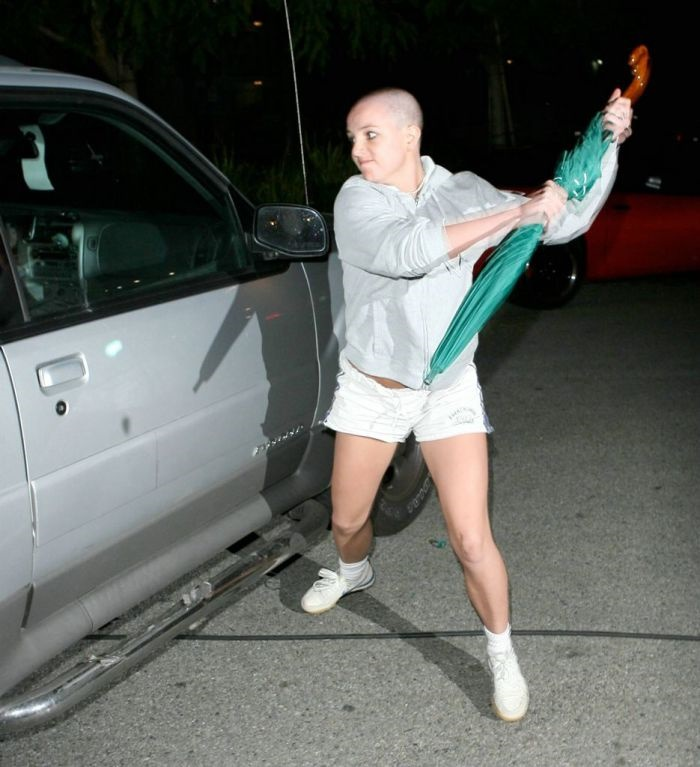 An umbrella used by Britney Spears during her attack on a paparazzo in 2007 is up for sale in an online auction.
Spears used the umbrella to attack photographer Daniel Ramos’ car on February 21, 2007, after being approached in a Los Angeles parking lot, during a turbulent period in her personal life.

Ramos kept the umbrella following the attack, and will now offer it for sale, with 50% of the proceeds to be donated to charity.

Ramos recalls the attack in his letter of provenance accompanying the umbrella:

"I was working on filming my documentary ‘Paparazzi: Full Throttle LA’…on the day Britney Spears attacked my SUV with a green umbrella…We caught up to the Pop Queen visiting her kids at Kevin’s home. She went to the gas station and I told her ‘we were concerned for her.’

"We then went to Jiffy Lube and Britney’s cousin Ali Simms came out of the drivers seat and approached me and held my video camera down and told me ‘Guys please don’t, please…’ that’s when Britney Spears came out of the passenger side and grabbed the green umbrella from the backseat and came after all of us, then threw the umbrella down on the pavement."

Having separated from her husband Kevin Federline in 2006, and spent time in rehab, Spears famously shaved her head and suffered a public breakdown – culminating on the umbrella incident, which made front page news across the world, with the headline "Britney’s Fury!"

However, in an interview with Ramos for Broadly, writer Mitchell Sunderland describes the attack as an important turning point in Spears’ life and career:

"The images have been compared to something out of a kitschy John Waters film…but over the years, they have taken on a more potent, almost mythical meaning thanks to fans and writers who believe Britney’s personal trouble and subsequent comeback have made her an unintentional feminist icon.

"With her umbrella, she was literally striking back at the media after years of often sexist public scrutiny."

Ramos has stated that 25% of the proceeds will benefit leukemia research, in memory of his late fiancée Tracey Naranjo, with another 25% benefitting Right Turn, a Massachusetts charity which uses creative arts therapies to help people suffering from addiction.