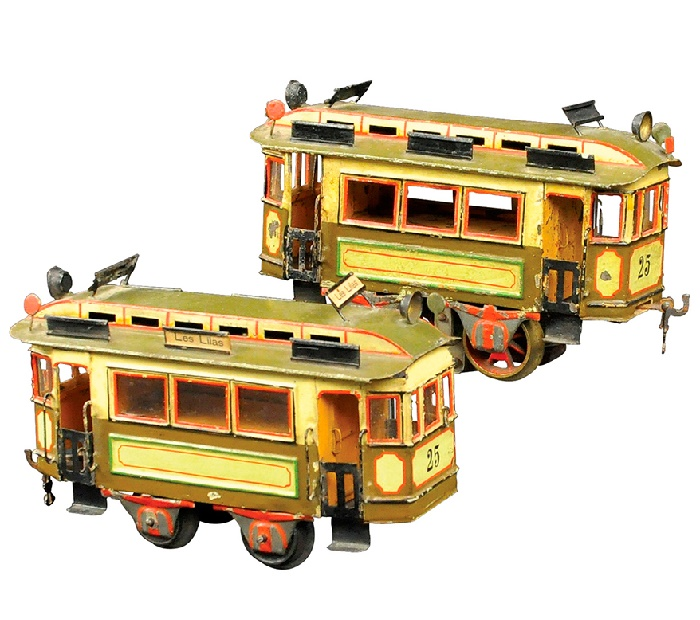 The private toy train collection of Jerry and Nina Greene will be offered for sale at Bertoia Auctions next month.
Assembled over the course of several decades, the collection features a wide range of European and American train cars, coaches and specialty cars, along with a treasure trove of rare stations and accessories.

The majority of accessories were produced by the German company Marklin, renowned for their attention to detail. "That’s why collectors love their stations so much," said Bertoia. "If a train station roof had shingles, Marklin would realistically emboss the roof on their toy version. If a station’s base was stone, they would hand-paint the toy station’s base to replicate stone."

The majority of Marklin’s trains and accessories were originally designed to be played with by children, meaning surviving pieces in good condition can be hard to find today. “Many of them are rather fragile and could have been broken if grabbed the wrong way by a child," said Bertoia. "It’s no wonder these accessories were so highly prized by Jerry and Nina.”

Standout lots amongst the trains and carriages are a Marklin 0-4-0 Electric Tramway clockwork trolley, described as “without question, this is one of the top pieces in the collection,” estimated at $10,000-$12,000; a red Marklin locomotive made solely for FAO Schwarz New York, valued at $15,000-$20,000; a Bing hand-painted gauge-3 Jupiter set, featuring a loco and tender with three cars, estimated at $30,000-$35,000; and rare sets from the likes of Voltamp, Boucher, Carlisle & Finch, Lionel and American Flyer.

The collection has been separated into 700 different lots, graded and estimated with the help of two seasoned experts, Uwe Heinz from Germany and Doug Predeville, a top US train dealer. "They worked six days a week, sometimes for 11 hours a day, to complete their mission," said Bertoia. "They were meticulous, like surgeons. They tried not to miss a thing, and they never seemed to tire of it."

Having been meticulously catalogues, the collection is currently on display at Bertoia Auctions’ gallery in New Jersey, and is set to roll across the auction block on Saturday April 9.