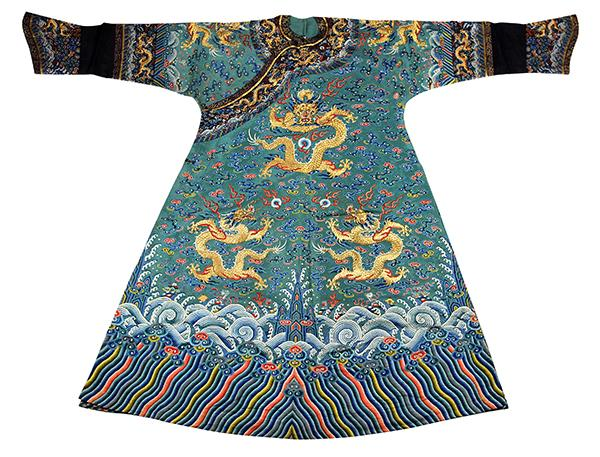 Asian art led the way at the recent Clars Auction Gallery sale in Oakland, California, which saw intense bidding across numerous categories.
Headlining the sale were three lots which soared to astonishing prices, far beyond their pre-sale estimates.

First was a Chinese Longquan type ice-crackled brush washer, offered with an estimate of $800-$1,200, which saw battling internet bidders push the final price to a remarkable $89,250.

Next was a Chinese celadon wall vase with an apocryphal Qianlong mark which sold for $77,350, smashing its original estimate of just $1,000-$1,500.

The same private collection also offered a late 19th century Chinese turquoise gauze Jifu dragon robe, which completed the trio of stunning results by soaring past its estimate of $3,000 – $5,000 to sell for $45,750.

The auction also achieved strong results in the Fine Art category. Notable lots included ‘Eglise de Chatou’ by French artist Maurice Utrillo, which sold for $77,350; ‘Mallards on the River’ by thHudson River School painter Jasper Francis Cropsey, which fetched $44,625; and John Marin’s watercolour ‘Boats in a Harbor, 1927’ which more than doubled its high estimate to sell for $28,650.

Topping the sale’s decorative arts and furnishings section was a George III Chinoiserie double fusee bracket clock by Ellicot of London, which quickly sped past its estimate of $4,000-$6,000 to sell for $35,700.

Other notable lots in this category included a late 19th century Louis XV style Chinese porcelain presse papiers that sold for $5,562, more than 10 times its high estimate; a Continental cut crystal-hanging candelabra that realized $8,925. and a circa 1900 Mahal carpet from West Persia that sold for $6,454.

Elsewhere there were strong prices achieved by contemporary design and estate jewelry, led by a New Hope School low table by Phllip Lloyd Powell which sold for $9,520 and a sapphire, diamond and platinum ring featuring a center shield cut sapphire weighing 5.68 carats which sold for $9,520.