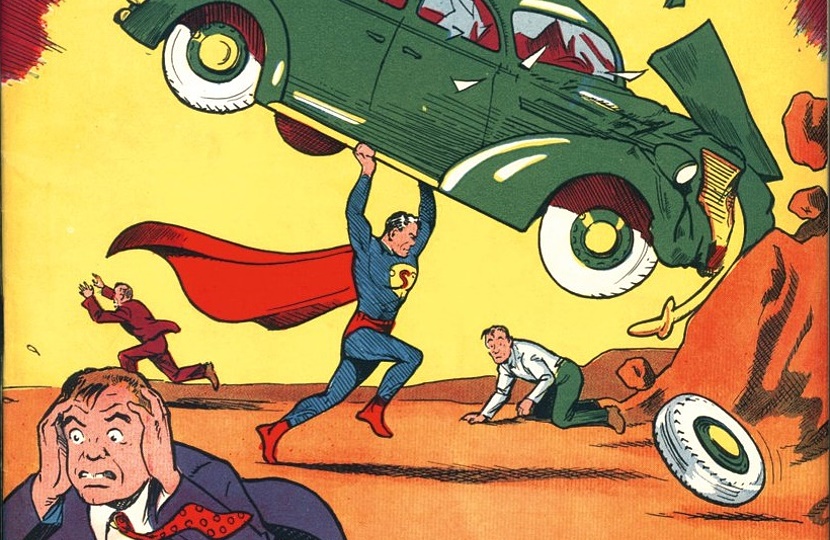 A rare copy of Action Comics #1, featuring the first appearance of Superman, has sold at auction in the US for more than $2m.

The 1938 book is considered the ‘Holy Grail’ for comic collectors, and it’s believed that just 50–100 copies remain in existence.

The online sale at Comic Connect had been scheduled to close on Monday evening (June 11), but an unprecedented surge of interest from prospective bidders caused the company’s website to crash.

The sale was extended to the following day, and when the dust settled more than 70 bids later the book had sold for an impressive $2.1m – the third-highest price ever paid for a comic book.

The book sold this week had been graded CGC 8.5 with white pages, making it one of the best-preserved copies in existence.

Just two further copies of Action Comics #1 have received higher grades of CGC 9.0, and both also surpassed the $2m mark at auction.

The first was also sold by Comic Connect in 2011 for a then-record $2.2m. It had originally belonged to the actor Nicolas Cage, and was dramatically stolen from his apartment in 2000, before being found in a storage locker in California more than a decade later.

The second copy sold on eBay in 2014 for $3.2m, a price which still stands as a world-record for any comic book – and this time the buyers were the owners of Comic Connect, Vincent Zurzolo and Stephen Fishler.

According to reports, both of these GC 9.0 copies are now part of the Impossible Collection, a collection of high-grade DC comics owned by the Lebanese billionaire and Vero co-founder Ayman Hariri.

“I’m fortunate enough to own the highest graded issue of Action #1, which is the first appearance of Superman,” he said in an interview with the Telegraph in 2016.

“I really love what the books represent, because the day before these comics were on the stands, those characters didn’t exist. The day after, they not only existed, they also were established in the imaginations of so many people, and had such an impact on the world.”

With both these copies locked away for the foreseeable future, the appearance of the CGC 8.5 copy marked a rare opportunity for collectors to grab themselves a high-grade example of the world’s most important comic book.

The feverish interest mirrored what happened in 1986, when the book was first discovered.

A gentleman in Pittsburgh, Pennsylvania found the perfectly preserved copy of Action Comics #1 tucked between the pages of an old hardback book he’d bought from a local auction.

Two weeks later he took the book along to a comic convention in New York, seeking advice and a valuation – and according to Comic Connect, all hell broke loose.

“What followed was a 48 hour feeding frenzy unmatched in the annals of comic book fandom. Safe to say, if murder were legal at that time, certain comic dealers would have not walked out of that show alive.

“Due to the simple fact that a number of the individuals who played a role in this episode are still very much alive, we will not expound on the gritty details. But those same gritty details, including a near fist fight, was the start of a story that ends with the Action 1 offered here.”

It seems unlikely that another copy of Action Comics #1 in such good condition will hit the block any time soon – but if it does, expect bidders to go crazy all over again.