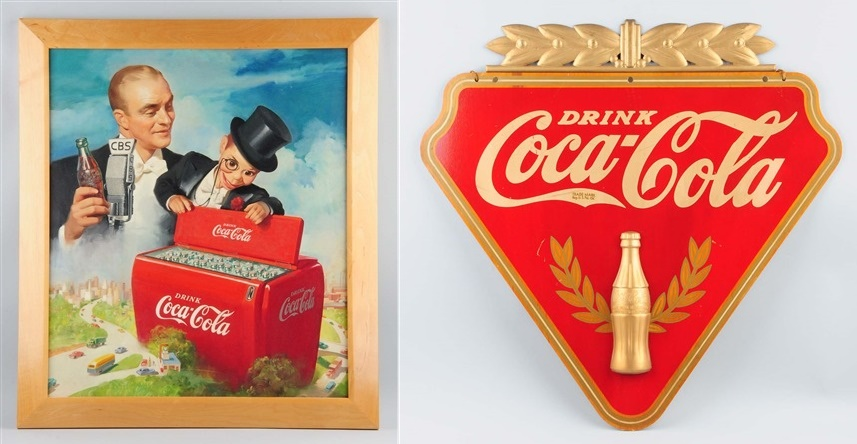 One of the world’s finest collections of vintage antique beverage and tobacco advertising is heading for sale at Morphy Auctions.
Assembled over 45 years, the Robert Newman collection is renowned throughout the hobby for its outstanding size, scope, and condition.

The first offering from the collection will include "world-class" Coca-Cola brand posters, signage, paintings, clocks and other unique items, amongst a catalogue of almost 1,200 investment-quality lots.

Amongst the most interesting items for collectors is a unique oil painting featuring radio stars Edgar Bergen and Charlie McCarthy. The famous ventriloquist and his even more famous dummy had a weekly show sponsored by Coca-Cola, and the artwork was featured in several national advertisements in 1950. Painted by artist Haddon Sundblum, who also created the iconic images of Santa Clause for Coca-Cola adverts, the unique work is valued at $40,000-$75,000.

"We are thrilled to present this first of two auctions featuring the Robert Newman collection of extraordinary antique beverage and tobacco advertising 45 years in the making," said Dan Morphy, President of Morphy Auctions.

"The quality of the items in this sale is truly in a class onto itself. Bob is known for his fantastic eye and his ability to find examples in ‘investment quality’ condition. And our cataloger, Gary Metz – one of the nation’s most recognized experts on antique and vintage Coca-Cola memorabilia – could not agree more!"

The Morphy Auctions May Premier Advertising Sale takes place on May 21-22.