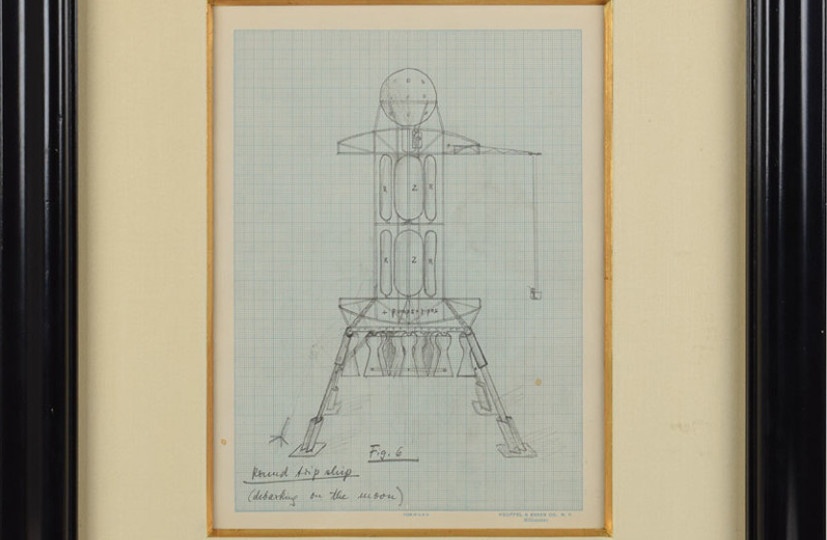 A collection of hand drawn plans and notes from the German rocket engineer Wernher von Braun realised $98,644 at RR Auction earlier this week.
The 26 item collection relates to a series of articles Von Braun worked on for Collier’s Magazine between 1952 and 1954. Titled “Man Will Conquer Space Soon!”, the series mapped the pathway to the stars – opening with the thrilling proviso “What you will read here is not science fiction”.

These plans were used by the magazine’s art department, which included the legendary science fiction artist Chesley Bonestell. The result was a tangible glimpse into the future. A decade and a half later, the first men landed on the Moon.

Von Braun was a hugely controversial figure. He had started out his career working on Nazi Germany’s top secret V-2 rocket programme, which caused huge amounts of misery in Europe in the closing days of the war. He was snatched up by the Americans in 1945 and immediately brought to the US to continue his research.

The main problem many had with Von Braun was that he was not punished like other high ranking Nazis. Indeed, he seemed to have been rewarded for his efforts. He was as a man singularly obsessed with his lifelong dream of spaceflight and did not seem to care in whose service his ambitions were channelled. However, he was absolutely essential to the US space program.

Satirical songwriter Tom Lehrer perfectly captured the mood of the time with his razor edged 1963 track “Werner Von Braun”: “Don’t say that he’s hypocritical/Say rather that he’s apolitical/’Once the rockets are up, who cares where they come down/That’s not my department,’ says Wernher von Braun”.