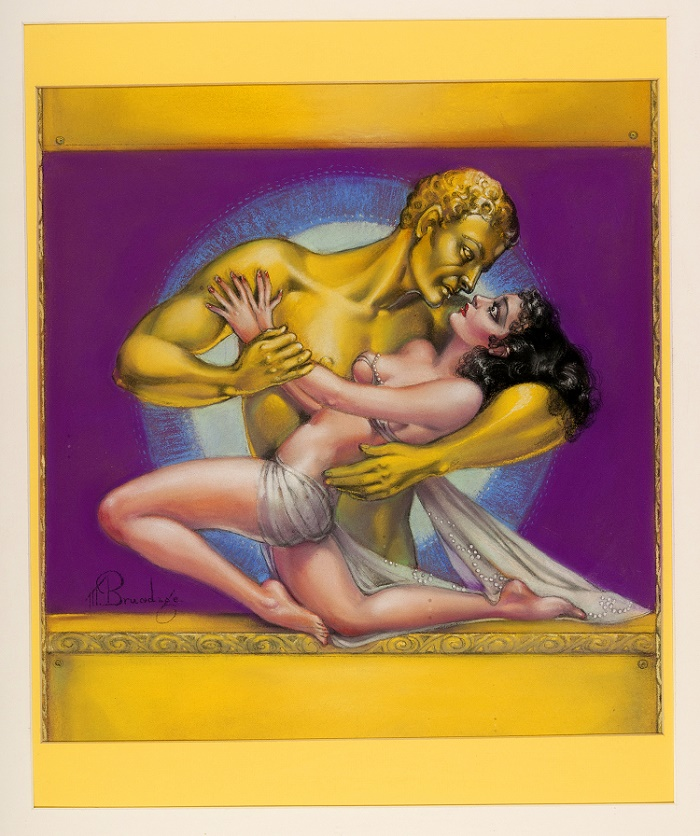 A piece of original cover art for the pulp magazine Weird Tales fetched the highest price in the latest auction at Hake’s Americana.
The illustration by renowned pulp artist Margaret Brundage was the top-selling lot in a sale which spanned everything from comic books, toys and vintage advertising to movie posters, rare coins and political memorabilia.

Brundage was one of the most influential pulp magazine illustrators of her day, whose work defined the genre and regularly graced the cover of Weird Tales between 1933 and 1938.

She was famed for her provocative depictions of scantily-clad women in perilous situations, which proved highly popular with the magazine’s readership, but too much for censors as new decency standards were introduced in the 1940s.

Brundage’s original artwork appeared on the cover of Weird Tales in June 1937, illustrating John R. Speer and Carlisle Schnitzer’s story ‘The Carnal God’ in which an evil golden statue comes to life. Described by Hake’s as "the nicest example we’ve offered in our 49 years", the unique artwork fetched a final price of $47,150.

Another piece of original artwork achieved the sale’s second-highest price – this time from the world of comic books. Bob Brown’s cover art for the May 1965 issue of ‘Doom Patrol’, featuring an almighty bout between Animal-Vegetable-Mineral Man, Elasti-Girl and Negative Man, is believed to be the only piece of Doom Patrol cover art ever offered at auction, and sold for $26,565.

Further leading lots in the eclectic auction included a highly rare 1864 ‘Lincoln and Johnson’ Presidential Campaign parade flag which sold for $23,655; an 1812 $5 Gold Capped Bust Half Eagle coin, graded PCGS MS63, which fetched $22,264; an original one-sheet poster for the 1954 release of the horror classic ‘The Creature from the Black Lagoon’, which sold for $18,107; and a copy of Amazing Spider-Man #129 from February 1974, featuring the comic-book debut of The Punisher, which sold for $8,855.