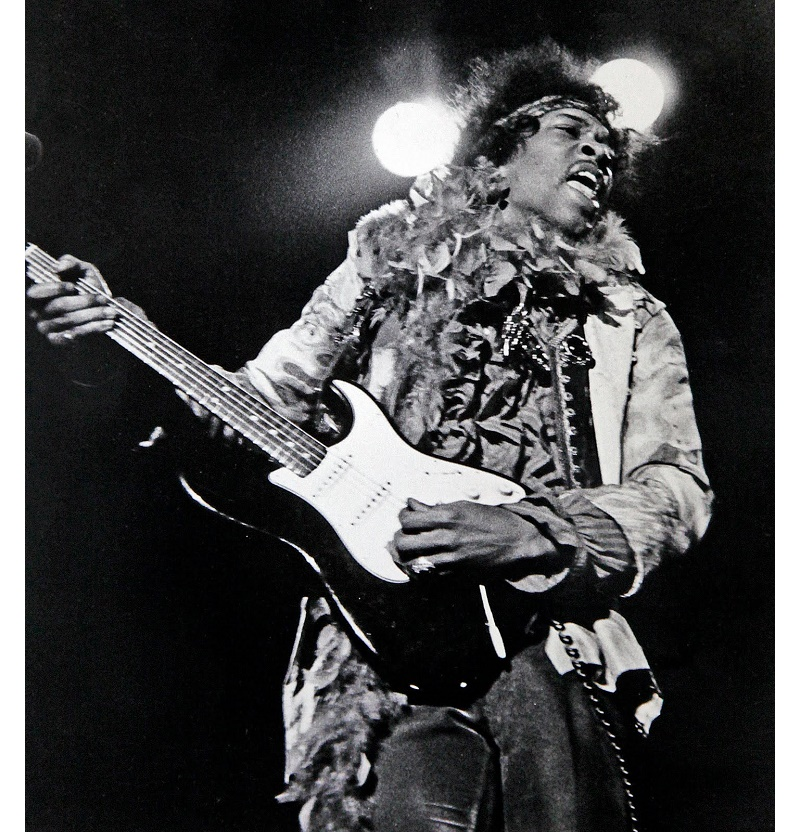 The guitar played by Jimi Hendrix during his legendary performance at the 1967 Monterey Pop festival is heading for sale in Los Angeles.
The 1966 Black Fender Stratocaster will be offered as part of a special Heritage Auctions sale on June 6, commemorating the 50th anniversary of the ‘Summer of Love’.

Although no estimate has been played on the iconic instrument, experts believe it could easily achieve a high six or even seven-figure sum.

“At Monterey Pop, the world was well-and-truly introduced to the still-unmatched greatness of Jimi Hendrix, and because of him, Rock n’ Roll would never be the same,” said the auction house. “This guitar was, and is, a part of that magic.”

Although he had learned his trade as a musician in his native U.S, Hendrix only became a star in his own right when he moved across the Atlantic in 1966 and took ‘Swinging Sixties’ London by storm.

One night in June 1967, having recently released their classic debut album ‘Are You Experienced?’, the Jimi Hendrix Experience played a blistering show at the Saville Theatre.

In his biography ‘Many Years From Now’, McCartney later recalled the show:

“Jimi opened, the curtains flew back and he came walking forward, playing ‘Sgt. Pepper’, and it had only been released on the Thursday so that was like the ultimate compliment. It’s still obviously a shining memory for me, because I admired him so much anyway…I put that down as one of the great honours of my career.”

McCartney was so impressed that he made it his mission to boost Hendrix’s career, and he knew perfect event to showcase his talent – the Monterey Pop festival in California.

The Beatle even agreed to join the festival’s organizing committee, on the proviso that Hendrix was included on the bill, even though American music fans had no idea who he was.

On Sunday June 18, The Jimi Hendrix Experience were introduced at the festival by Rolling Stone Brian Jones, who described them as “the most exciting performer [he had] ever heard”.

An hour later, American music fans knew exactly who he was.

“On the final day of the Monterey Pop Festival, the Jimi Hendrix Experience stepped on stage in front of an American audience for the first time…and completely demolished Rock music as it was,” commented Heritage Auctions.

“In its place was something entirely new, a monolith built of Blues, Psychedelia, Earth-shaking volume coupled with ear-splitting feedback, and of course, an adept playing ability that seemed as effortless as it was masterful.”

According to the Los Angeles Times, Hendrix’s performance that afternoon saw him “graduate from rumour to legend”, and he ended his show by setting his guitar on fire, in what Rolling Stone magazine called “one of rock’s most perfect moments”.

Thankfully the guitar that went up in flames was a cheaper instrument, which Hendrix switched to during the last song of the show. He needed an explosive finale to out-do the guitar smashing antics of The Who’s Pete Townshend – but at the same time, he couldn’t bring himself to destroy his beloved 1966 Fender Stratocaster.

That guitar survived, and Hendrix took it with him during the band’s first U.S tour, where it graced the famous stages at the Fillmore in San Francisco, Golden Gate Park and the Whisky A-Go-Go in L.A.

After Hendrix tragically passed away in 1970, the guitar remained in the possession of his UK manager Michael Jeffrey, and later passed to his US manager Bob Levine, who kept it in his personal collection for decades.

The guitar now hits the open market for the first time, having been acquired privately by a collector in the mid-1990s.

Since then it has featured as a star attraction in several museum exhibitions, including those at London’s Handel House, the EMP in Seattle, and the ‘You Say You Want a Revolution’ exhibition at the V&A in London.

Guitars owned by Jimi Hendrix are amongst the most revered items of 20th century music memorabilia, and have consistently fetched huge prices at auction.

Notable examples include the remains of the guitar Hendrix burned at Monterey Pop, which sold back in 2012 for almost $380,000; and his Epiphone acoustic guitar, on which he composed many of his classic songs, which sold in December 2016 for $260,500.

The guitar from Hendrix’s most famous performance, the Woodstock Festival at which he played an iconic cover of The Star Spangled Banner, sold in 1993 for a reported $1.3 million.

That price remains the highest ever paid for a Jimi Hendrix guitar – but his Monterey Pop Fender Strat looks set to challenge for the record.