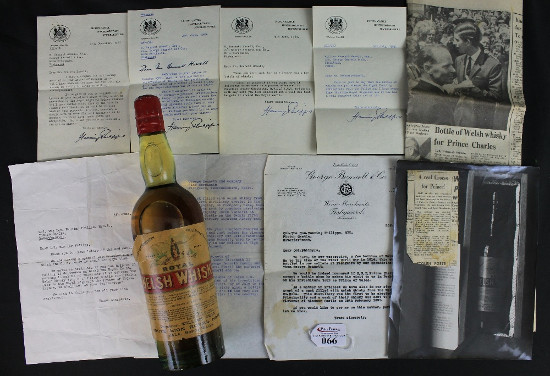 A couple of bottles of Royal Welsh Whisky have sold for substantially above their estimates at Peter Francis Auctioneers.
Both date to around 1900 and were produced by the Welsh Whisky Distillery.

While we mainly think of whisky as originating in Scotland, distillation actually began in the Middle East and spread west.

It has been produced in Wales since the middle ages.

The Welsh Whisky Distillery company was founded in 1889, but closed down in 1910 – along with the rest of the Welsh whisky industry.

This collapse was primarily due to the rise of the temperance movement.

Today the industry is experiencing something of a revival, with the establishment of the Penderyn distillery in Brecon.

They’re labelled: “Distilled with the greatest possible care from malt only and is absolutely pure, connoisseurs pronounce it quite unique and as a wholesome stimulant it is very highly recommended”.

Both lots include some fascinating advertising, correspondence and other miscellanea relating to the distillery.

Auctioneer Charles Hampshire told the BBC: "One is going back near the distillery, the other I’m not so sure about, so it’s a nice finish, particularly for one of them."