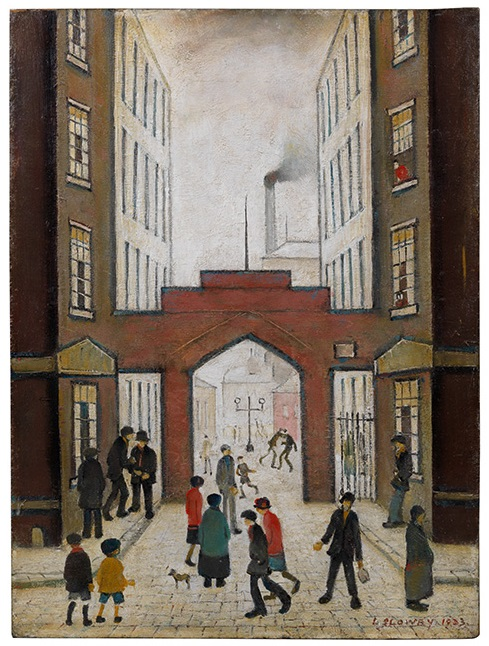 An important work by L.S Lowry will lead a Bonhams auction of Modern British and Irish art in London next month.
Painted in 1933, ‘Entrance to the Dwellings’ depicts Salford Improved Industrial Dwellings, a series of houses originally built for industrial workers in 1870 and finally demolished in the 1960s.

“Figures face us, turn their backs on us, chat with one another, walk in profile or peer out from windows above so that the viewer’s eye is constantly kept stimulated. They represent the gritty reality of inner city northern England during the inter-war period and were the essence of Lowry’s art.”

The work was painted during a pivotal moment in Lowry’s life, both in terms of his artistic technique and his professional career.

His reputation grew as his works were exhibited in towns across the North of England, such as Rochdale, Southport, Bradford and Oldham, and in 1934 he was elected as a member of the Royal Society of British Artist.

His paintings also began to make greater use of impasto – a technique in which he built up thick layers of paint on top of each other, creating depth of colour, then scraped away details such as architectural features, railings and street paving in his urban landscapes.

The sale will also feature the Cyril Reddihough collection, described as "one of finest collections of British Modernist art to come to auction", which features major works by Ben Nicholson, Winifred Nicholson, Barbara Hepworth, Henry Moore and Christopher Wood.