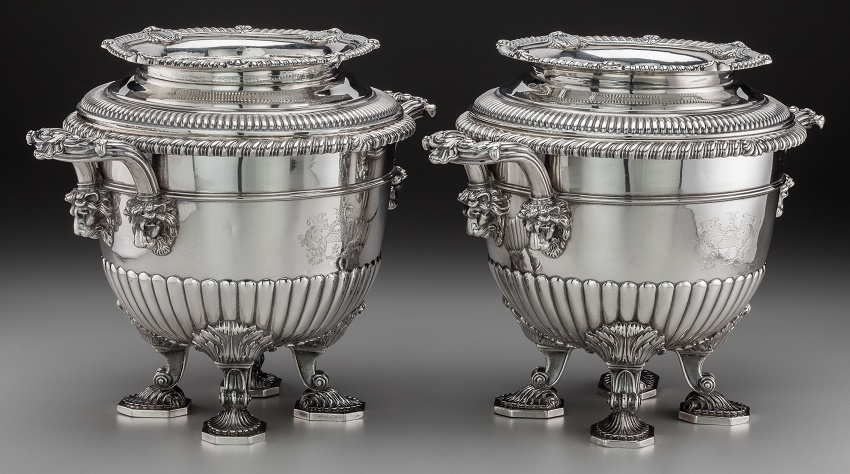 A pair of wine coolers by Paul Storr will lead the upcoming Fine Silver and Vertu sale at Heritage Auctions in Dallas.
Storr was England’s most celebrated silversmith during the first half of the 19th century, producing pieces for royalty and the aristocracy which adorned many of Europe’s grandest stately homes.

The pair of George III Silver Wine Coolers was produced by Storr in London circa 1808, whilst working for the revered retail firm of Rundell, Bridge and Rundell, and is expected to sell for $50,000+.

The auction will also focus strongly on some of America’s finest silversmiths, from the 19th century to the present day.

"This auction offers collectors a strong group of American late 19th century work showing the wide range of inspiration characterizing these years," said Karen Rigdon, Director of Silver and Decorative Arts at Heritage. "From Russian and Persian to Japanese inspired forms and decoration, this auction offers a wide range of special examples hand-selected for our clients this season."

Amongst the leading lots from American makers is a Tiffany & Co. monumental acid-etched silver tray in the Renaissance revival style, made in New York, circa 1873-1891.

Featuring a depiction of men and women in courting and dancing scenes, the grand 28-1/4 inch tray is valued at more than $25,000.

Further Tiffany highlights include a unique silver humidor, bearing the SPECIAL HAND WORK mark and attributed to Arthur Leroy Barney, estimated at $10,000+, a Japanese-inspired three-piece Demitasse set, circa 1902-1907, estimated at $7,000; and a Japanesque silver brush holder-form vase, circa 1873-1891, estimated at $4,000.

Elsewhere the sale features fine examples from the Gorham Manufacturing Co., of Providence, Rhode Island, such as a stunning Martelé Silver Center Bowl, circa 1907, bearing the rare facsimile signature of chief designer WC Codman, estimated at $10,000+; and a rare Gorham Martelé silver geranium vase, circa 1905, valued at $8,000+.

The auction will also have an eye on the present day, with works by some of the 21 century’s finest silversmiths. Standout lots include a four-piece silver and rosewood tea service by Michael and Maureen Banner of Monterey, Massachusetts, offered with an estimate of $20,000+.