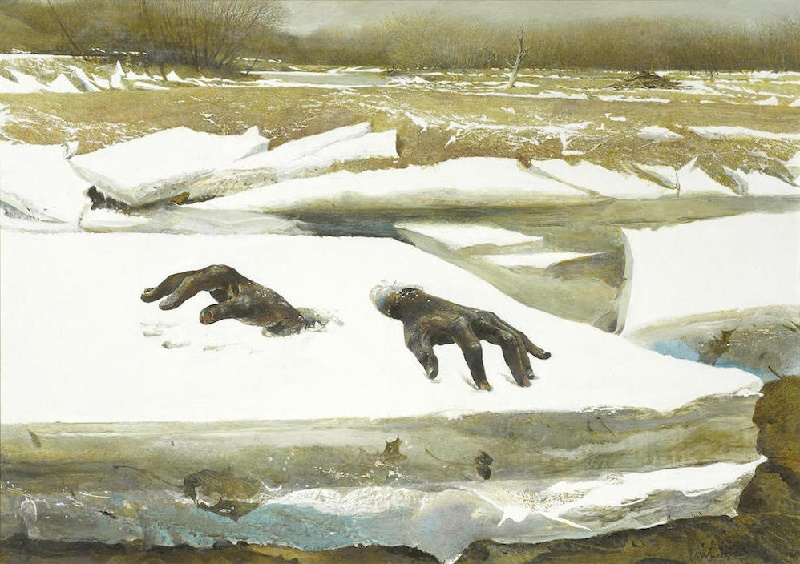 A mysterious Andrew Wyeth painting believed to be a rare self-portrait will be offered at Bonhams in New York next month.
Regarded as "one of America’s greatest and most beloved 20th century artists", Wyeth spent the majority of his life and career in the region of Chadds Ford, Pennsylvania, capturing the natural landscape and the people of his surrounding community.

‘Breakup’ was painted in 1994, following a severe winter freeze which left the local Brandywine River covered with thick blankets of razor sharp ice. As the thaw finally came, Wyeth painted these sheets as they were released to the current down river, using tempera to create thick layers on the canvas.

Wyeth’s choice of materials mirrored the natural formation of his subject: "Tempera is something with which I build—like building in great layers the way the earth was itself built. Tempera is not the medium for swiftness."

Wyeth added a further layer of meaning by adding a pair of disembodied hands to the winter scene, based on bronze casts of his own hands which were commission by his wife, Betsy James Wyeth.

Many experts have interpreted the work as an abstracted self-portrait, with Wyeth placing depicting himself as part of the natural landscape itself.

"Andrew Wyeth was a master of allusion and often hid the meaning of his works under an apparently calm and simple surface. Breakup is no exception," said Director of American Art Kayla Carlsen.

"It is a wonderfully intriguing painting which leaves the viewer guessing…but it’s a puzzle that is richly rewarding."

Having been acquired directly from the artist in 1994, and gifted to the present owner in 2006, the painting will now cross the Auction block for the first time with an estimate of $1.5-$2.5 million.

The Bonhams American Art sale takes place in New York on May 18.