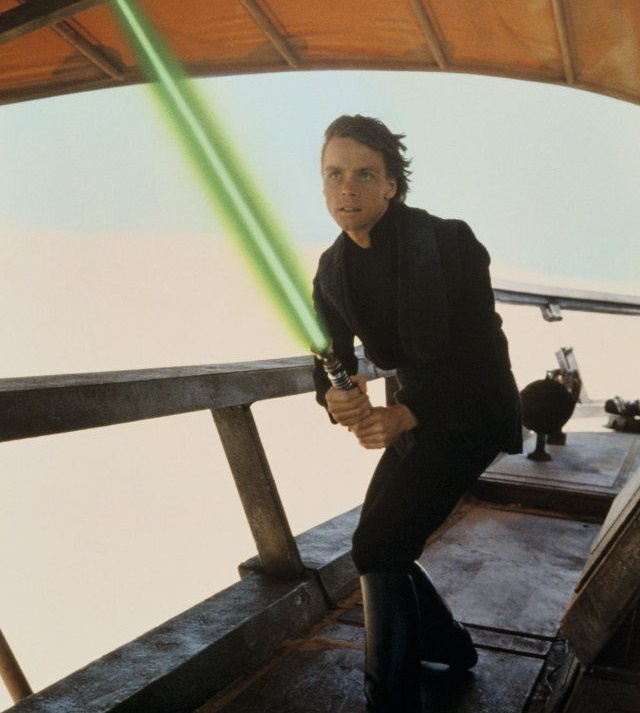 Luke Skywalker’s lightsaber from The Return of the Jedi is going up for sale at Bonhams later this month.
The iconic prop is expected to fetch $150,000 – $250,000, as part of the ‘TCM Presents…Out Of This World’ auction in New York on November 21.

The lightsaber appears in one of the film’s most famous sequences, as Luke, Han Solo and Chewbacca are about to be thrown into the dreaded Sarlac Pit by Jabba the Hutt.

The trio look doomed to be digested over a thousand years, until Luke signals to R2-D2 and a lightsaber pops up from a hidden compartment inside his faithful droid.

The appearance of the weapon is a key moment in the film, as it confirm Luke has truly become a Jedi Master with a plan.

It also means that Jabba is about to get his giant butt kicked.

The lightsaber offered at Bonhams is the same one revealed by R2-D2 in this famous sequence, and can be photo-matched using a slight chip on the top rim.

The prop is custom-made from machined cast metal, brass, and rubber. However, when it came to ejecting the lightsaber into Luke’s hands, the production built a lighter, more aerodynamic plastic version to fire through the air.

Screen-used lightsabers are amongst the most valuable and sought-after items of Star Wars memorabilia, and usually fetch huge sums at auction.

The lightsaber wielded by Mark Hamil throughout the original 1977 film achieved $240,000 at Profiles in History in 2008, when it was offered for sale from the collection of series producer Gary Kurtz.

And back in 2005, Darth Vader’s lightsaber from the climactic fight scene in The Empire Strikes Back sold at the same auction house for $118,000.