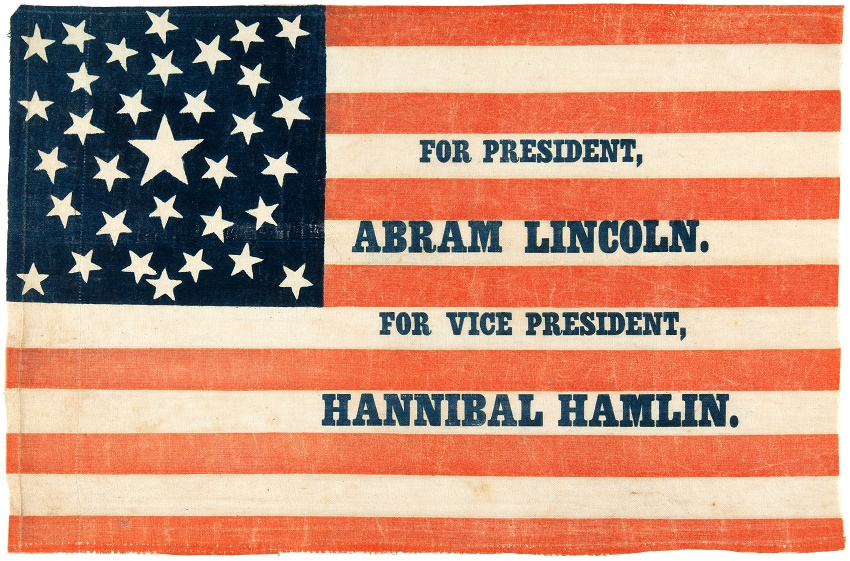 An incredibly rare Abraham Lincoln parade flag will lead a stunning selection of political memorabilia at Hake’s Americana next month.
The online sale will feature more than 500 political items amongst a catalogue of over 2,800 pop culture collectibles and historic artefacts.

The Lincoln flag dates back to his presidential campaign of 1860, in which he successfully ran alongside Hannibal Hamlin.

"Abraham Lincoln parade flags consistently rank among the most coveted items by political memorabilia collectors, and an example like the Lincoln/Hamlin flag entered in our July sale would be considered a milestone acquisition for even the most advanced collection," said Alex Winter, president of Hake’s Americana.

The remarkably preserved flag, complete with the misspelling of "Abram Lincoln", was originally discovered in the 1980s as one of several 19th century flags used as backing for an antique quilt.

Having been shielded from both wear and sunlight for over a century, the flag remains vibrant and in superb condition.

Another notable lot within the sale is an original Black Panthers poster featuring the political leader and activist Fred Hampton, who was killed by Chicago police during a raid on hishome in 1969.

Designed by Emory Douglas, the poster features Hampton’s most famous quote "You Can Jail A Revolutionary, But You Can’t Jail The Revolution", and also bears the words "Born August 30, 1948/Murdered By Fascist Pigs Dec. 4, 1969."

As a striking example of a political poster from one of the most turbulent times in modern U.S history, the Hampton poster is only the fourth example of its kind known to exist and is excepted top sell for $2,000 – $5,000.

"Black Panther Party posters are in great demand," said Winter. "Right now is a great time to lock up rare items of this type when they’re fresh to the market. There can be no doubt that these kinds of opportunities eventually will end."