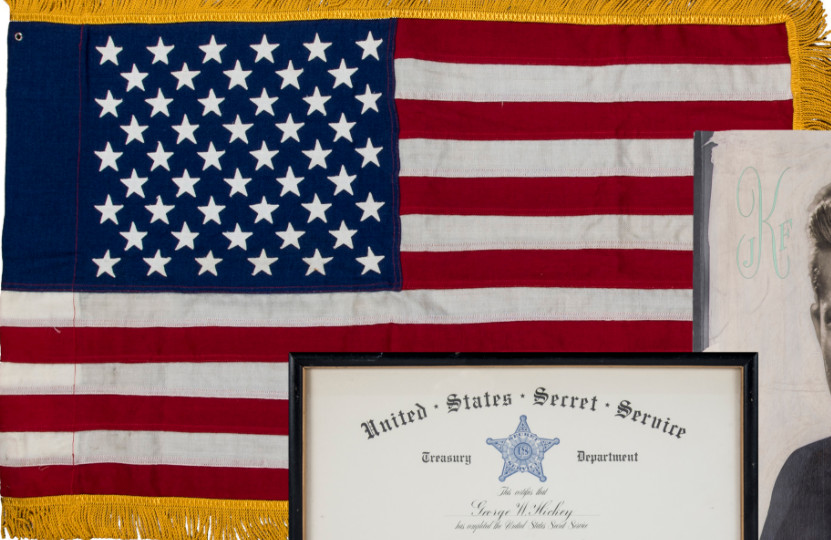 A US flag claimed to be the one flown on the right side of the limousine President John F Kennedy was riding in the day he was assassinated is set to cross the block at Goldin Auctions.

As the phrasing indicates, there’s some controversy over the authenticity of the flag. The other contender is a pair of flags, which were apparently gifted to Kennedy’s secretary Evelyn Lincoln three days after the assassination and which sold for $450,000 in 2005.

However, this flag is accompanied by some exceptional provenance. It was apparently removed by Secret Service agent George Hickey Jr, who was travelling in the presidential motorcade just behind Kennedy’s car.

Hickey was the man tasked with driving JFK’s limo back to Love Airfield from Parkland Memorial Hospital, where the president was rushed in the immediate aftermath of the shooting. He later testified before the Warren Commission set up to investigate the assasination.&nbsp;&nbsp;

The lot is accompanied by a letter from Hickey’s son, George Hickey III, who explains how his father kept “these relics as a keepsake of his fallen President…placing them in the top drawer of his personal desk where they remained for the remainder of his life.” It also includes various pieces affirming Hickey’s status as a Secret Service agent, including his official White House pass.

Ultimately buyers will have to decide whether the evidence outweighs the risk, but the result set last year suggests there’s no shortage of demand.