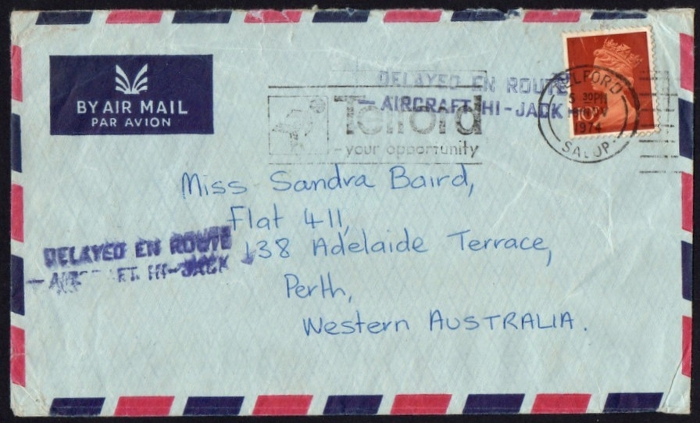 A superb array of Australian and international postage history greets bidders at Ace Stamp Auctions’ next sale this weekend (Saturday 29 and Sunday 30 October).
Among the highlights at the University of Western Australia Guild Function Centre will be a November 1974 airmail envelope delayed by a highjacking&nbsp;(picture above).

The UK to Perth, Australia letter was in the hold of a British Airways VC10 bound for the Far East when four Palestinian men hijacked the plane while it was refuelling at Dubai airport.

Demanding the release of seven Palestinian terrorists, the hijackers forced the pilot to fly to Tunis, where they killed a German passenger and dumped his body on the tarmac.

The hijackers eventually gave themselves up without further bloodshed.

It has an estimate of AUD$120 ($90) but could achieve more, considering its scarcity and fascinating history, as Ian Boulton of the auction house explains.

Also among the 2,500 lots is a fateful 1930 cover from Tananarive, Madagascar to Paris. A flight carrying the letter crashed in thick forest in the Belgian Congo, killing the three-man crew. The bodies of the men were eaten by cannibals, who were less enamoured by the flight’s postal cargo. A rescue party found the letter &nbsp;two months after the crash.

Containing its original correspondence and a "RAID MADAGASCAR FRANCE ACCIDENT DU 13 JANVIER 1930" cachet on the reverse, it has an AUS$400 ($304) estimate.

The most valuable item in the sale is expected to be a superbly comprehensive King George VI Commonwealth stamps collection, in an original 1956 Stanley Gibbons illustrated album. Featuring examples in mint lightly hinged and used condition, Boulton estimates the catalogue value of the individual stamps to be in excess of $48,000.

A China-issued miniature sheet for the 1961 World Table Tennis Championships is another feature lot. The mint item has an AUD$1,000 ($760) estimate.