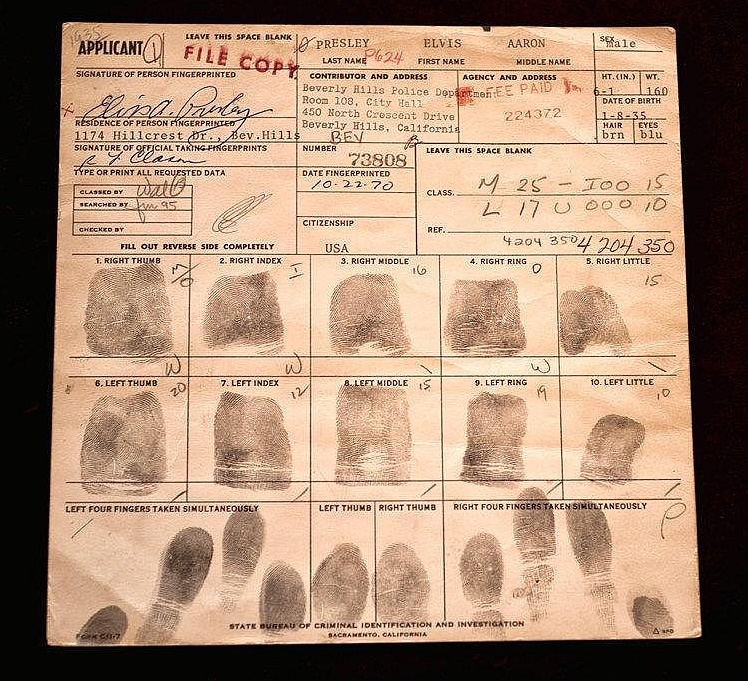 Elvis Presley’s personal gun license is heading for auction in Switzerland next month.
The California license includes Presley’s signature and fingerprints, and is expected to sell for $47,000 – $52,000 in a sale of music memorabilia at the Galartis auction house near Lake Geneva.

Presley’s passion for guns was legendary. At the time of his death he owned 38 weapons, including a machine gun, and is thought to have given hundreds of guns away as gifts to friends throughout his life.

Elvis had a permit to carry concealed weapons, which came in hands as by the early 1970s he was performing on stage with a pair of derringer pistols inside his boots – a precaution he took after several threats were made against his life.

However, as Elvis insisted on being armed wherever he went in the U.S, he also needed the correct paperwork filed in every state he visited.

This license was issued in 1970, and gave Presley permission to carry a Colt 38 revolver and a Beretta 7.6 automatic.

It features his personal details, including confirmation of his sex, hair and eye colour, height, weight and date of birth; his address, listed as 1174 Hillcrest Drive in Beverly Hills; and his signature, signed ‘Elvis A. Presley’.

The license also includes Elvis’ fingerprints, believed to be the only full set in existence.

It was standard practice for gun licenses such as this to be destroyed when the holder passed away. For whatever reason, Presley’s California license survived following his death in 1977, and has since become a unique, sought-after piece of Elvis memorabilia.

Further highlights from the Galartis sale will include an original psychedelic painting by Jimmy Hendrix; a bajo owned by George Harrison; and jackets worn by both John Lennon and Paul McCartney.

The auction takes place on July 9.