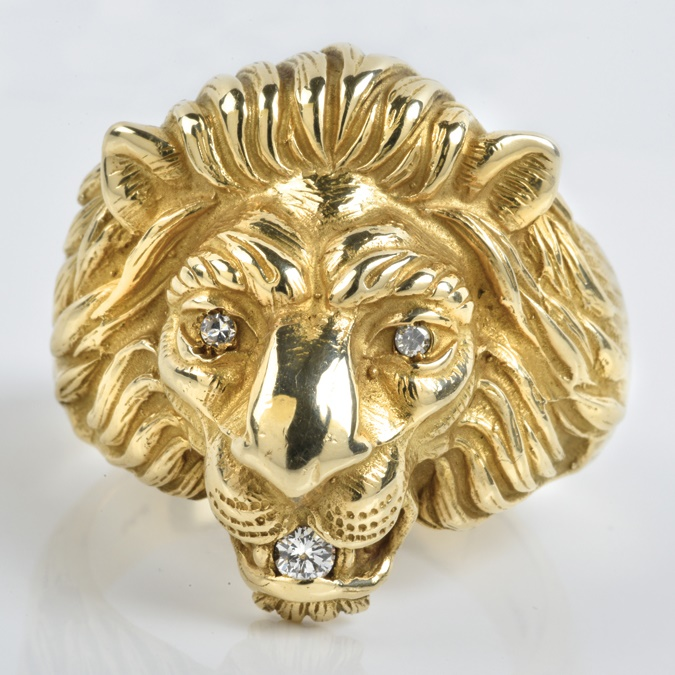 Guns, gloves and gold led the way at Graceland last week, in the latest auction of Elvis Presley memorabilia at the star’s former home in Memphis.
Topping the sale was an impressive 14-karat gold and diamond ring in the form of a lion’s head, given by Elvis to his friend Charlie Hodge.

The pair had originally met whilst serving in the U.S Army at Fort Hood in Texas, and Hodge would remain one of Elvis’ closest confidants for the rest of his life, living at the Graceland estate and assisting the Presley family after his friend’s death.

The lion’s head was a regular motif amongst Presley’s jewelry, and he often wore these pieces during significant occasions such as his famous meeting with President Nixon. Having been acquired directly from Hodge in the early 1980s by a European collector, the ring sold at Graceland for $37,500.

Elvis was well-known for giving away his jewelry, but occasionally he traded it for something a little more explosive – like this Colt ‘Police Positive Special’ .32 caliber pistol.

Elvis acquired the gun in the 1970s by trading it for a ring at Tiny’s Gun Store in Palm Springs, California. But after using it on targets including watermelons and grapefruit, he apparently decided the pistol wasn’t powerful enough and gave it to longtime bodyguard Richard Grob.

The pistol was sold along with a letter from Grob, who had kept in his collection for decades, and achieved a price of $10,625.

The leading lot from Presley’s long movie career was a pair of boxing gloves worn onscreen in the film Kid Galahad.

The 1962 film saw Elvis star as Walter Gulick, a car mechanic who makes it big as a boxer after refusing to take a dive for gangsters. The gloves were amongst several pairs worn on set by Presley throughout filming, and sold for a final price of $11,875.

Further notable lots from the Graceland auction included an archive of photographs by Tupelo photographer Terry Wood, capturing Elvis’ performance in his home town in September 1956; a Platinum Record Award presented to Elvis after his Aloha from Hawaii album sold more than 1 million copies; and a red scarf gifted by Elvis to Alvena Roy, his longtime cook at Graceland.