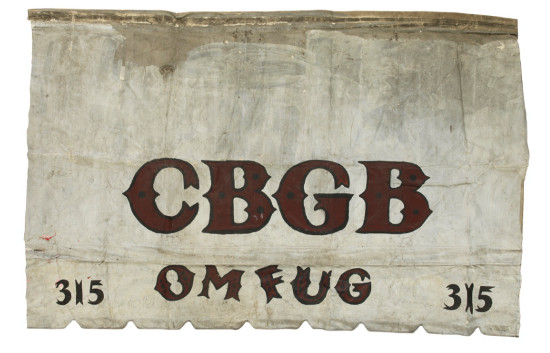 One of the original awnings that hung above the entrance to legendary New York punk venue CBGB is selling at Sotheby’s.
It’s valued at $25,000-35,000 ahead of the December 10 From Folk to Fury auction.

Over its 30 year history the club played host to performances from some of New York’s greatest bands and artists, including Talking Heads, Patti Smith and Blondie.

It closed its shutters for the final time in 2006.

The awning is consigned from the collection of onetime manager Drew Bushong, who explained how he ended up with the piece. “It was my day off and I was drunk at Mars Bar, the beautiful, nasty dive bar that was nearby.

“I think it was about 2004. I walked over to CB’s to see if anyone was around and there was this box in the dumpsters outside.

“I had seen it before above [owner] Hilly’s desk for a year or so. I remember thinking, ‘Why is this in the trash?’

“I woke up the next morning – shoes on, I was rather hung over – and the box with the awning in it was sitting in my bed.”

Interestingly, CBGB was originally intended as a roots venue and became a centre for new music largely by accident. &nbsp;

The club’s full name was CBGB OMFUG – which stood for Country, Bluegrass, Blues and Other Music for Uplifting Gormandizers. 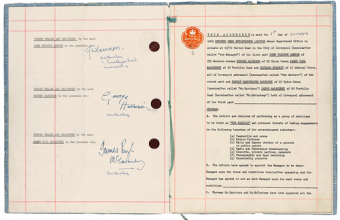 Beatles contract with Brian Epstein could sell for £500,000