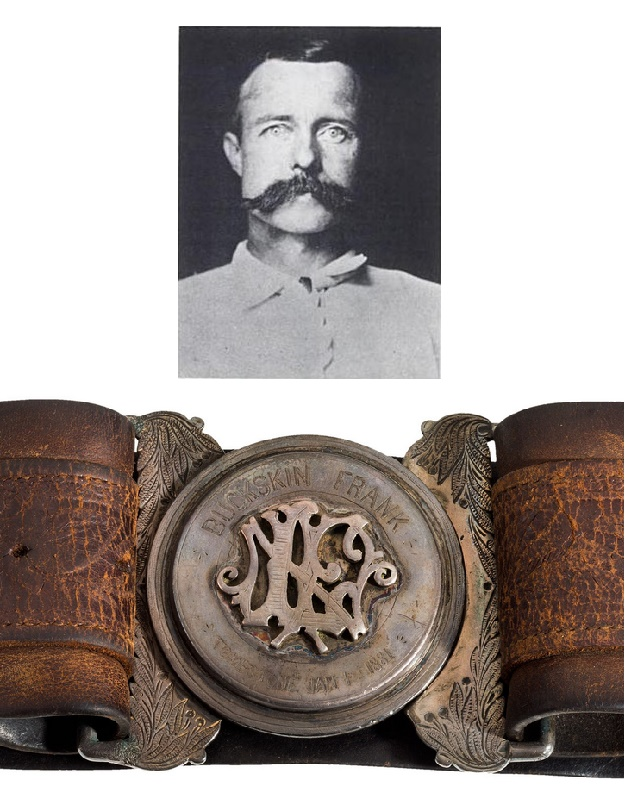 The gun belt worn by the Old West gunman ‘Buckskin Frank’ Leslie will cross the block next month, as one of the highlights of Heritage Auctions’ Legends of the West sale.
Described as "one of the most prized of all Tombstone artifacts", the silver-buckled belt bears the inscription "Buckskin Frank, Tombstone, Jan. 1, 1881".

Leslie was one of the most famous characters in the legendary town of Tombstone, Arizona, a former U.S Army scout who also passed his time as a gambler, bartender, rancher, miner and con-man.

Leslie arrived in Tombstone in 1880 in his trademark buckskin fringed jacket, and opened the Cosmopolitan Saloon with his business partner William H. Knapp. He quickly earned himself a mean reputation, with shooting skills that Wyatt Earp compared to those of Doc Holiday, and it wasn’t long before he found trouble.

In July 1880 he shot and killed Mike Killeen in an apparent act of self-defence, before marrying Killeen’s widow Mary Jane just eight days later. Then when fire swept through the town in 1882 the Cosmopolitan Saloon was destroyed, and Leslie took a job at the Oriental Saloon, working as a bartender and part-time card dealer.

He was later strongly suspected of the murder of famous Tombstone gunslinger John Ringo, and killed Billy Claibourne, a survivor of the O.K. Corral, in a gun fight in 1882. Years later he met a local prostitute at the Birdcage Theatre named Mollie Williams, but in 1889 shot and killed her in a fit of jealous rage.

He was convicted of murder, but served only seven years before being granted parole and heading to California with a young divorcee named Belle Stowe. He is believed to have died homeless and penniless in San Francisco in 1930, having confessed to killing a total of 13 people.

According to records, the belt was found in 1966 by the renowned Western dealer and collector Greg Martin, and was later owned by collectors such as Herb Glass, Gerald Fox, and Buel Ford.

Further important Tombstone artefacts on offer at Heritage will include a rare document signed by several members of the Clanton Clan, including Ike Clanton, another survivor of the O.K Corral gunfight (unlike his brother Billy, who wasn’t so lucky); and license to run a ‘House of Ill Fame’ granted to Tombstone madam Emma Parker, signed on the reverse by lawman Virgil Earp.

The Heritage Auctions’ Legends of the West sale takes place in Dallas on June 11.