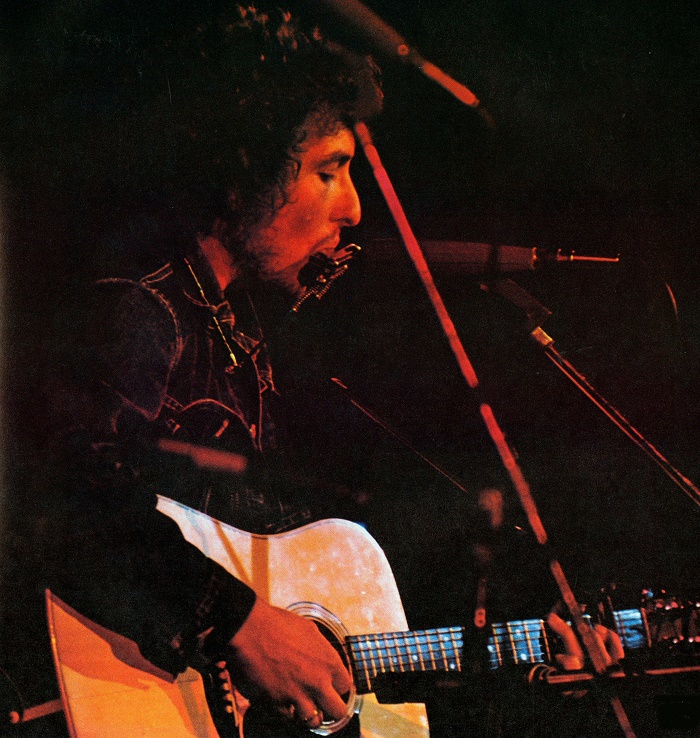 Bob Dylan’s acoustic guitar from the historic 1971 Concert for Bangladesh is going up for sale at Heritage Auctions.

The 1963 Martin D-28 Acoustic Guitar has been described as “a veritable treasure for the Dylan faithful, and a piece of music history”.

Dylan owned the guitar from the late 1960s until 1977, and played it on stage during countless live performances during the period.

It will now be offered as part of the Entertainment & Music Memorabilia Signature Auction in Dallas on November 11.

The Concert for Bangladesh was a charity show organized by George Harrison at Madison Square Garden, to raise funds for refugees following the Bangladesh Liberation War-related genocide.

The show was simply advertised as ‘George Harrison and Friends’, and featured a secret line-up including the likes of Ringo Starr, Eric Clapton, Billy Preston, Leon Russell, Ravi Shankar and Bob Dylan.

However, prior to the show, nobody really knew whether Dylan would even show up. He hadn’t toured since 1966, and his last live performance had been in August 1969, at the Isle of Wight festival.

According to Harrison, towards the end of the performance his set-list simply read “Bob?”, and as he turned he was relieved to see Dylan at the side of the stage.

“He was so nervous – he had his guitar on and his shades – he was sort of coming on, coming [pumps his arms and shoulders] … It was only at that moment that I knew for sure he was going to do it,” he later recalled.

Dylan’s unadvertised appearance stunned the crowd, and was described by the Don Heckman in the Village Voice as a “real cortex-snapping moment”.

His performance proved to be the pinnacle of the show, as he reeled of a mini-set of classics including ‘A Hard Rain’s A-Gonna Fall’, ‘It Takes a Lot to Laugh, It Takes a Train to Cry’, ‘Blowin’ in the Wind’, ‘Mr. Tambourine Man’, and ‘Just Like a Woman’.

When Dylan returned to touring a few years later, he took the Martin guitar out with him on the road.

He played it extensively on stage throughout the entire ‘Rolling Thunder Revue’ tour from October 30, 1975 to May 25, 1976, and at various other shows across the U.S.

Then in 1977 Dylan decided he wanted to switch from Martin guitars to Gibsons, and sold the D-28 Acoustic to his private guitar tech Larry Cragg.

For the past 40 years it has remained in Cragg’s personal collection, unplayed since the last time Dylan picked it up, and it will now be offered at auction for the first time.

Bob Dylan’s stage-used guitars, particularly those he owned during the 1960s and 70s, are rare and highly prized by collectors.

Back in 2013, the 1964 Fender Stratocaster Electric Guitar he played during his landmark ‘Dylan goes electric’ gig at the 1965 Newport Folk Festival sold for $965,000.