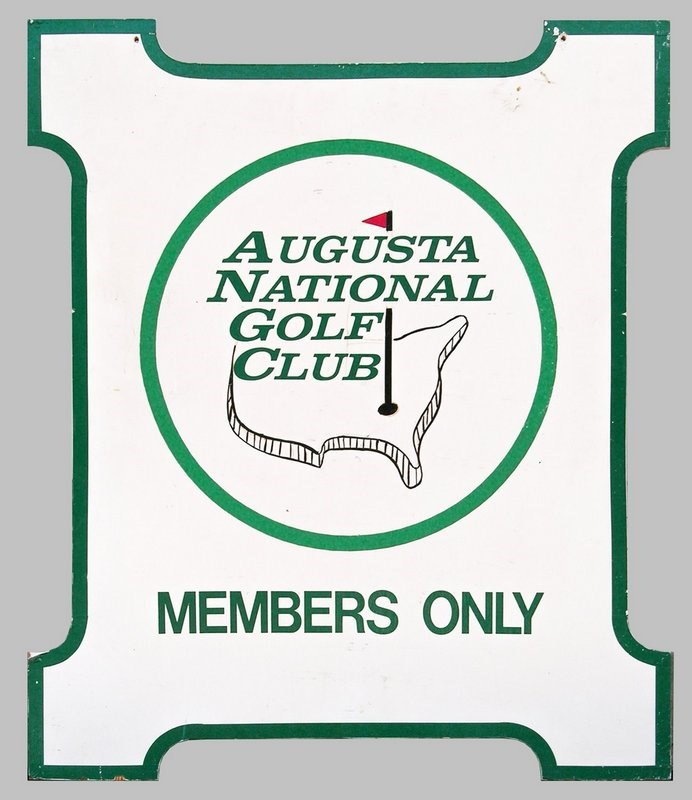 An original sign from the Augusta National Golf Club, the home of the Masters tournament, has sold for a record auction price in the U.S.
The sign is one of maybe 20 examples to have hung outside the famously understated entrance to the club throughout its 83-year history.

It was reportedly in place during the 1960s and 70s, when it would have welcomed iconic champions such as Arnold Palmer, Gary Player and Jack Nicklaus, before being replaced and discarded.

The sign was fortunately rescued by a local Augusta, Georgia resident, who kept it in his collection for many years, apparently unaware of its value to collectors.

However, having listed it for sale on eBay in 2010 he was apparently overwhelmed by the response, and sold it privately for a substantial sum to a private collector.

It hit the auction block again last week, this time with golf memorabilia specialists Green Jacket Auctions, where it achieved a final price of $25,063 – a record sum for any vintage golf sign at auction.

"Even after 10 years of auctions, every once in a while we hear about a piece of memorabilia that simply stops us in our tracks" said the auction house. "This is one such item."

Further highlights from the sale included an iconic Masters green jacket, dating from the late 1950s, which sold for $14,146; an early blacksmith iron, dated circa 1800 and originally owned by the famed collector Jaime Ortiz-Patino, which sold for $7,716; an original 1790 print of ‘The Blackheath Golfer’ by Lemuel Francis Abbot, the most famous golf portrait in history, which realized $17,300; and highly rare 1934 Masters Program signed by Augusta National Golf Club Chairman Clifford Roberts, which fetched $11,816.