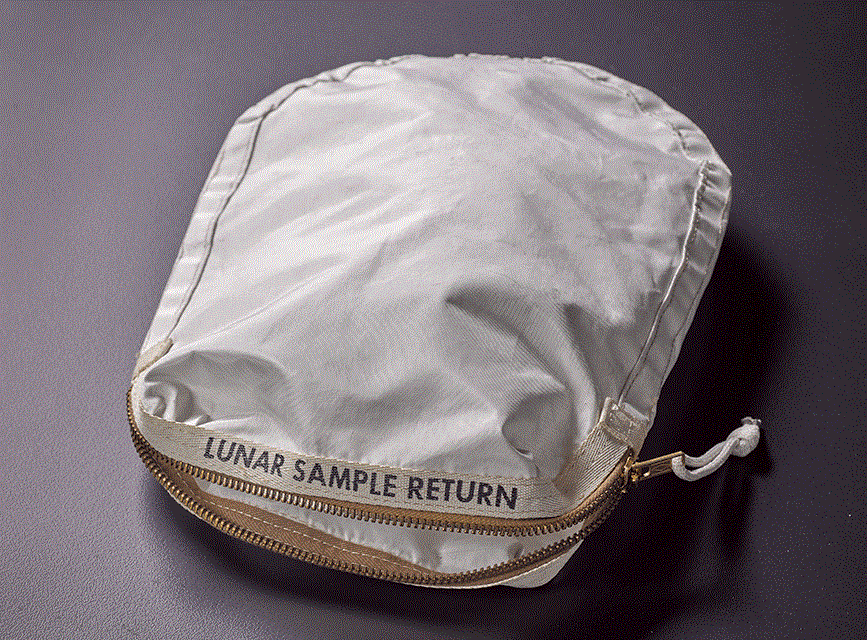 A bag used by Neil Armstrong to collect lunar samples during the Apollo 11 mission has sold for $1.8 million at Sotheby’s.

The sample bag hit the auction block in New York on July 20, as part of an auction of historic space memorabilia which realized a total of $3.8 million.

The bag, which still contained traces of moon rocks and dust, had been described as “the most important space artefact to ever appear at auction”.

“To be able to see such an object in person is a once in a lifetime opportunity,” said Cassandra Hatton, Vice President & Senior Specialist of Sotheby’s Books & Manuscripts Department.

“It is one thing to read about going to the moon; it is quite another to hold in one’s hands an object that was actually there, and that still carries traces of that faraway place.”

But there was controversy surrounding the manner in which the lunar sample bag had appeared on the open market.

Having returned to Earth with the crew of Apollo 11, the bag had then vanished from NASA archives, before turning up decades later in the collection of Kansas space museum president Max Ary

Ary was later convicted of stealing artifacts from the museum and selling them online, and in 2015 his forfeited property was auctioned off by the U.S. Marshals Service.

Due to an inventory error, the lunar sample bag was mislabelled, and nobody realized that it was a hugely important piece of space history. Or that, technically, it still belonged to NASA.

It was snapped up at the auction by collector Nancy Lee Carlson for just $995 – but when she sent it off to NASA experts to help her authenticate it, they finally realized it was missing from their archives and refused to give it back.

Carlson then began a two-year court battle which ended earlier this year, when a judge ruled that, although the bag should never have been sold at the auction, it now legally belonged to Carlson.

NASA grudgingly returned the bag, and then had to watch as it sold on Thursday evening to an anonymous buyer.

The bag set a new world record price for any piece of U.S space memorabilia, beating the $1.62 million paid for a watch worn on the moon by Dave Scott during the Apollo 15 mission.