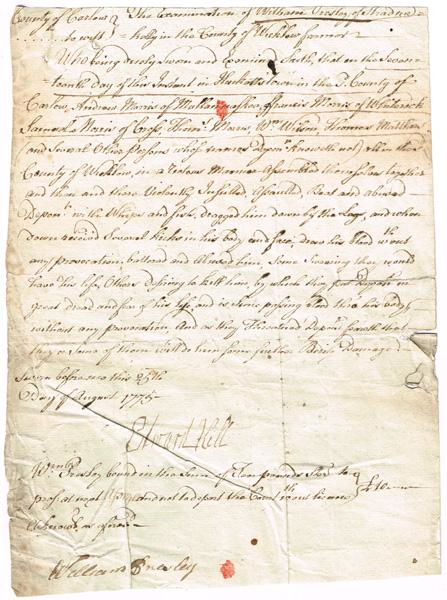 A historic document which traces Elvis Presley’s Irish roots is headed for auction in Dublin next month.
Whyte’s Auctioneers will offer an 18th century court document which reveals the reason Presley’s ancestors emigrated to America.

William Presley, the singer’s great-great-great-great-grandfather, was originally a farmer from Shillelagh in County Wicklow. However, the document shows that in August 1775, William was attacked by a group of local men.

"Andrew Morris of Mullannashea, ffrancis Morris of Whiterock, Samuel Morris of Cross, Thomas Morris, William Wilson, Thomas Matthers ( and Several Other Persons whose names Deponent knoweth not )… Violently Insulted, Assaulted, Beat and abused Deponent with Whips and fists,… battered and abused him. Some Swearing they would have his life."

According to Presley, the group used “whips and fists, [and] dragged him down by the legs”, leaving him in “great dread and fear of his life”.

All shook up by the attack, William and his son left Ireland and travelled to New Orleans just a few months later. Records show that by 1880 the family were living in Carolina, and in 1881 William moved to Tennessee with his newborn son Dunnan Presley.

The family remained in Tennessee for several generations, resulting in the marriage of Vernon Elvis and Gladys Love Smith in 1933. Gladys herself was thought to have Native American ancestry, with her great-great-grandmother, Morning Dove White, believed to have been from the Cherokee tribe.

In 1935, 160 years after his relatives set off for America, Elvis was born in Tupelo, Mississippi, and the rest is rock’n’roll history.

"Elvis’s great-great-great-great-grandfather left Ireland after being attacked . . . this document proves the link and explains why Elvis was born in America," commented auctioneer Ian Whyte.