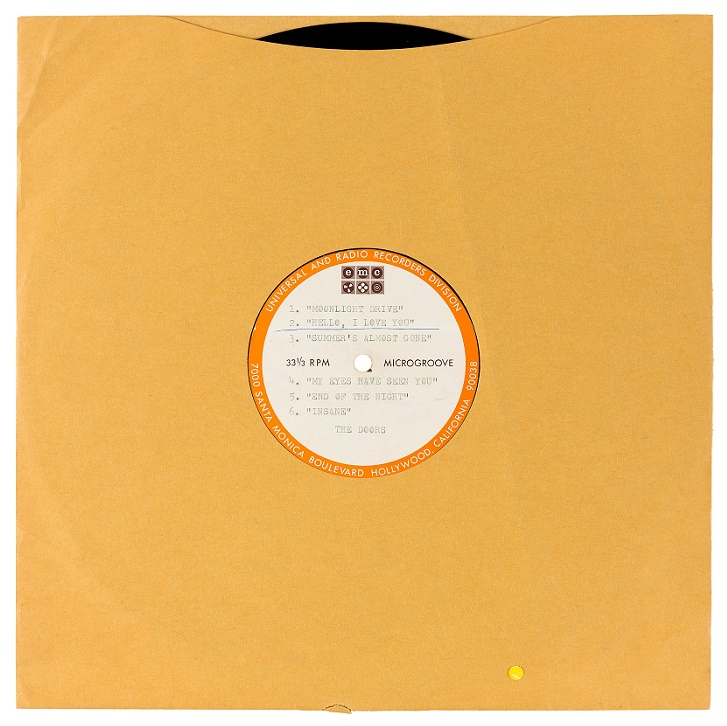 A highly rare early demo by The Doors is amongst the treasure trove of music memorabilia on offer at Heritage Auctions later this month.
Described as "the holy grail for Doors collectors", the acetate recording captures the band taking their first, hesitant steps towards stardom.

This six-track demo has been widely bootlegged over the years, before being officially released in 1997 using keyboardist Ray Manzarek’s own copy of the acetate, which is one of only five known to exist.

Manzarek had originally booked the recording session at World Pacific Studios in Los Angeles for his own band, Rick & the Ravens, in which he played with his brothers Rick and Jim.

However, in July 1965 he met Jim Morrison on Venice Beach, and the pair instantly began to share musical ideas. They quickly recruited drummer John Densmore, who Manzarek knew through his meditation classes, then bassist Patty Sullivan, before heading into the studio as a six-piece on September 2, 1965.

Together they recorded six songs, ‘Moonlight Drive’, ‘Hello, I Love You’, ‘Summer’s Almost Gone’, ‘My Eyes Have Seen You’, ‘End of the Night’ and ‘Insane’.

The sound of the band is markedly different to their later musical style, with Manzarek playing blues piano rather than his distinct electric organ, and Morrison’s vocals still sounding shy and tentative.

However, the musicianship and song writing was strong from the start, and five of the demo tracks would later make their way (in rerecorded form) onto the band’s first three albums.

Following the exit of Manzarek’s two brothers and session bassist Sullivan, the band soon morphed into its classic four-piece line-up with the addition of guitarist Robby Krieger.

They spent the next years earning their shot with residencies at the Los Angeles clubs London Fog and the famous Whisky a Go Go, where they were finally spotted by Elektra Records president Jac Holzman.

Today The Doors are regarded as one of the most influential rock bands of the 20th century, and original artefacts from their career are highly sought-after by collectors.

This acetate recording has been described as "absolutely phenomenal" and "simply historic", and is expected to sell for more than $25,000 when it crosses the block at Heritage on June 24-25