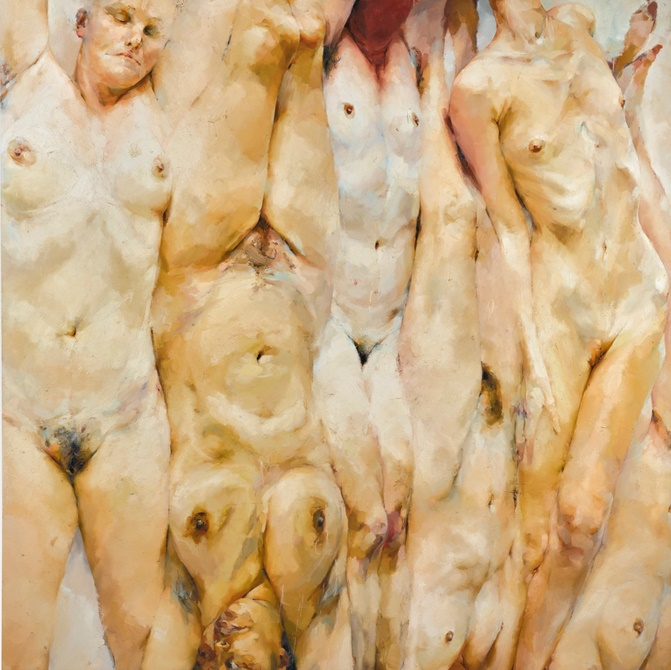 A career-defining work by the British artist Jenny Saville has set a new auction record in London, as part of a Contemporary Art sale at Sotheby’s.
Her 1997 painting ‘Shift’ topped the sale, which achieved £52.1 million as bidders from 41 countries competed for numerous fresh-to-the-market works.

Described as "a true icon of the young British art phenomenon", Saville’s painting was first shown at the seminal, epoch -defining exhibition ‘Sensation: Young British Artists from the Saatchi Collection’ in 1997

The show, which also featured works by the likes of Damien Hirst, Tracy Emin, Jake & Dinos Chapman and Sam Taylor Wood, caused controversy around the world and introduced the generation of YBAs – Young British Artists – who would come to define to the contemporary art scene over the next decade.

Regarded by many as Saville’s masterpiece, ‘Shift’ was offered at public auction for the first time in its history, and sold for £6.81 million ($9.05 million) – shattering the previous auction record for the artist almost three times over.

Christie’s described the painting as "utterly definitive of this era in recent art history…Shift is an absolute masterclass in tone and texture that completely shatters conventional norms of femininity and beauty, forcing the viewer to re-evaluate such patriarchal constructs."

It was purchased by Wang Wei, director of the Long Museum in China, and will be included in the forthcoming ‘She’ exhibition of works by international female artists at the Long Museum (West Bund) which runs from July 27 to October 30.

The auction also offered ‘The Last Rainforest’, Keith Haring’s "last great masterpiece" painted just prior to his death in 1990. Having remained in the collection of the artist’s friend, renowned photographer David LaChapelle, since 2005, the painting exceeded its top estimate to sell for £4.2m ($5.6 million), setting a new auction record for Haring’s work.

"It’s clear that the passion for collecting continues to override any broader concerns about the economy," said Alex Branczik, Sotheby’s Head of Contemporary Art Europe.