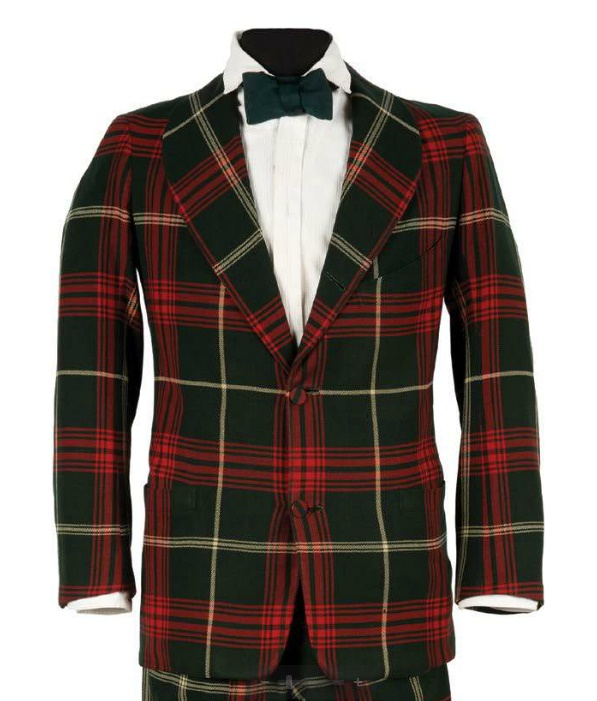 A tartan suit once owned by both the Duke of Windsor and his father King George V is up for auction in Los Angeles.
The suit will cross the block at Julien’s Auctions, where it’s expected to sell for $10,000 – $20,000.

According to experts, the suit is the only item of clothing in private hands to have been owned by two British kings

The suit was originally made in 1897 for George V, and was later inherited by his son Edward VIII when he became King in 1936 – before famously abdicating a few months later, to maintain his controversial relationship with Wallace Simpson.

The suit pattern is a special tartan created for the Duke of Rothesay – the official title held by the heir apparent to the British throne.

Both Edward and his father had previously held the title before becoming King, as does the current heir apparent Prince Charles.

The tartan hunting suit was later mentioned specifically by both the Duke and Duchess in their respective autobiographies.

In A Family Album, published in 1960, the Duke wrote: "Few of my father’s clothes were of any use to me after his death…I did, however, take one of his Inverness capes, and a Rothesay hunting tartan suit, which he used to wear for tea after shooting."

The Duchess also wrote of the suit in her 1956 book The Heart Has Its Reasons, although she seemed bemused by his attachment to the old suit.

"For some time after our marriage I was puzzled by the fact that while he was the acknowledged leader of men’s fashion, he rarely bought a new suit…Take, for instance, that tartan dinner suit His Royal Highness wore last night at dinner.

"According to the tailor’s marks on the inside pocket, it was made for his father in 1897. Now, I am happy to see the suit still looking so well, after being refitted to His Royal Highness."

The Duke’s role as a style icon was clearly evident by the effect the tartan suit inadvertently had on the world of fashion.

"I happened to wear for dinner one evening at La Croe near Antibes, where the Duchess and I lived for a while after the last war," recalled the Duke. "One of our guests mentioned the fact to a friend in the men’s fashion trade, who immediately cabled the news to America.

"Within a few months tartan had become a popular material for every sort of masculine garment, from dinner jackets and cummerbunds to swimming trunks and beach trunks."