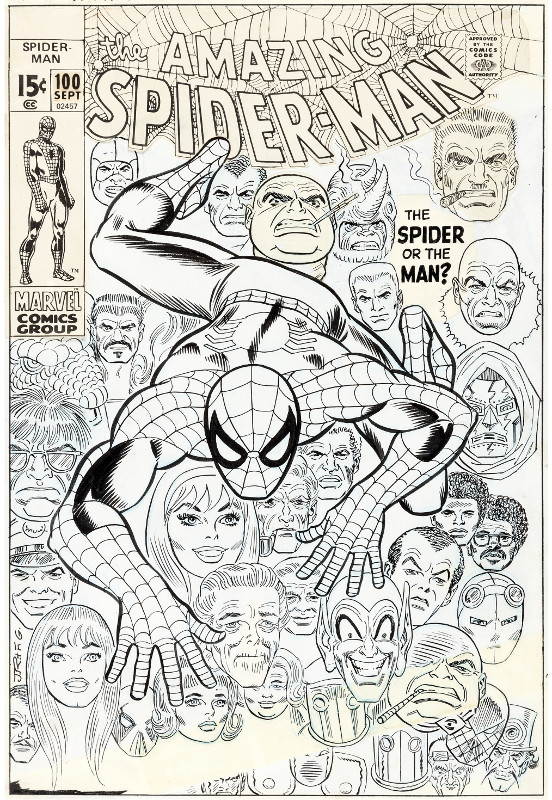 John Romita Sr and Frank Giacoia’s original artwork for the cover of Amazing Spider-Man #100 (1971) led a sale of comic book art at Heritage Auctions.
The piece made $478,000 on February 23, a record for a Marvel silver or bronze age cover.

It’s not hard to see why collectors were getting hot under the collar.

As Heritage explains, this was “possibly Marvel’s greatest ‘floating heads cover’ ever, as this beauty featured pretty much anyone who was anyone in the Spider-verse!

“His entire supporting cast (Aunt May, Gwen Stacy, Mary Jane, Harry Osborn, J. Jonah Jameson, Betty Brant, etc.) is present as you would expect, along with the major Spidey-villains: Doc Ock, Vulture, Scorpion, Rhino, the Lizard, the Beetle (ever notice how many of Spider-Man’s enemies are based on animals?), Sandman, Kingpin, Kraven the Hunter, Doctor Doom, Green Goblin, and Mysterio.”

That’s a big result given just how obscure this work is. It’s only been published on two occasions.

Frazetta (1928-2010) is among the most influential fantasy artists of all time. His elaborate paintings of muscled barbarians battling terrifying monsters set the tone for the genre from the 1940s onwards.

In recent years the originals have become ever more highly prized.

In 2016, a piece titled At the Earth’s Core made a record $1m. This latest result proves there is plenty of headroom in the market, making a new record probable within the next year or so.