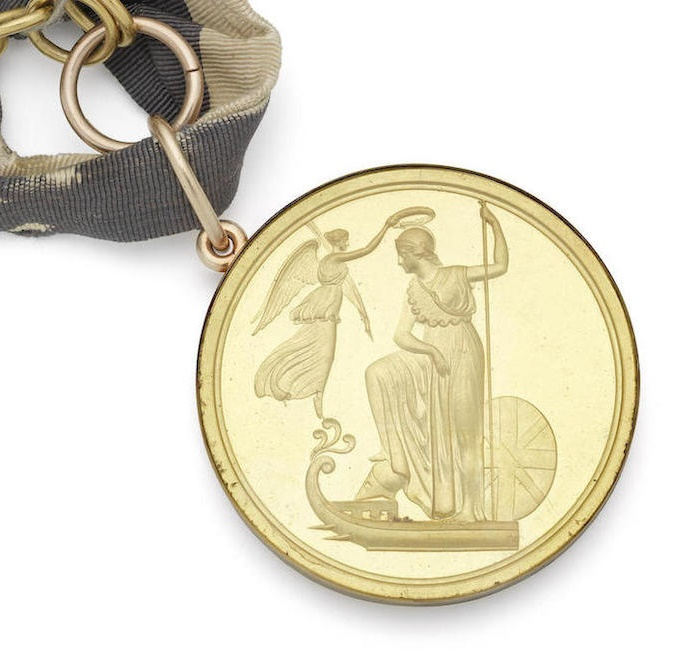 A highly rare medal celebrating a British naval victory during the French Revolutionary Wars will be offered at Bonhams later this month.
The large gold medal was one of only seven examples struck to mark the victory at the Battle of the Glorious First of June in 1784, and was awarded to Admiral Lord Graves, captain of HMS The Royal Sovereign.

"This is an incredibly scarce and desirable medal in excellent condition and its rarity is reflected in the high estimate," said John Millensted, Director of Coins and Medals at Bonhams. "I expect it to have wide appeal to collectors all over the world."

The rare medal is now expected to sell for £140,000-£160,000 when it crosses the block on March 23, as part of the Medals, Bonds, Banknotes and Coins sale at Bonhams in Knightsbridge, London.

The Battle of the Glorious First of June saw the British Fleet strike a blow to the French Navy from which it never really recovered. The two forces engaged in battle when an American convoy carrying grain attempted to reach France through a British blockade, to aid a population on the brink of starvation.

Although the convoy eventually made it to France, the British inflicted a severe tactical defeat and the French fleet returned to port, where it remained virtually crippled and blockaded until the French Revolutionary Wars finally ended in 1802.

The medal will be offered alongside further mementos from Admiral Lord Graves’ career, including a Lloyds presentation trophy in recognition of his gallant conduct on the "ever memorable 1st of June 1794".

The Battle probably marked the high point of the Admiral’s career, coming after a court martial in 1756 for failing to engage the enemy during the Seven Years War, and his defeat at the Battle of Chesapeake in September 1761 which effectively led to the end of the American War of Independence when it forced the surrender of Lord Cornwallis to George Washington at Yorktown.

The Medals, Bonds, Banknotes and Coins sale takes place at Bonhams in Knightsbridge, London on March 23.