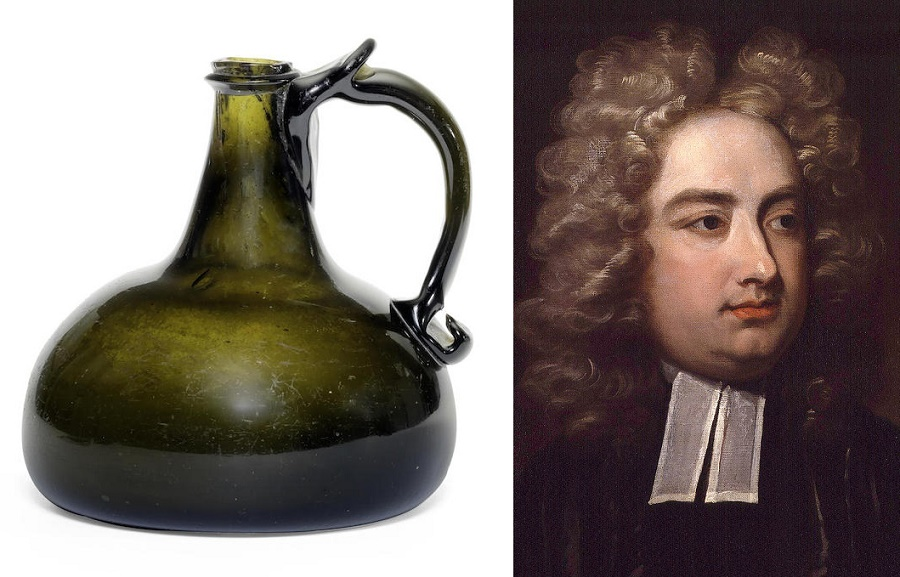 A unique 18th century serving bottle owned by the celebrated writer Jonathan Swift will be auctioned at Bonhams next month.
Swift is regarded as the finest satirist in the history of the English language, and wrote the classic work Gulliver’s Travels in 1726.

He was also a renowned essayist, political pamphleteer, poet and a cleric, who became Dean of St Patrick’s Cathedral, Dublin.

The glass serving bottle, known as an ‘onion’ bottle due to its shape, was produced in the early 18th century and bears a curious inscription:

Although it appears to be Latin, this text is actually written in a form of cod-Latin known as ‘Latino-Anglicus’, which Swift invented to amuse his friends.

The first line translates as "I Swift Deacon" – a reference to Swift being ordained as a Deacon of the Irish Church in 1695, prior to his appointment as Dean of St Patrick’s Cathedral in Dublin in 1713.

The rest of the text roughly translates as ‘filling a glass in thanks to my friends and drinking in memory of my homeland with good drinks and whisking smoke.’

"This is a very rare bottle in its own right but as we did more research the evidence began to mount that it had once been in the hands of one of Ireland’s greatest writers, Jonathan Swift," said Bonhams Head of Ceramics, John Sandon.

"There is little doubt in my mind that Swift was the original owner and that it was made to his specification."

The Bonhams British Ceramics and Glass sale takes place in London on November 3.