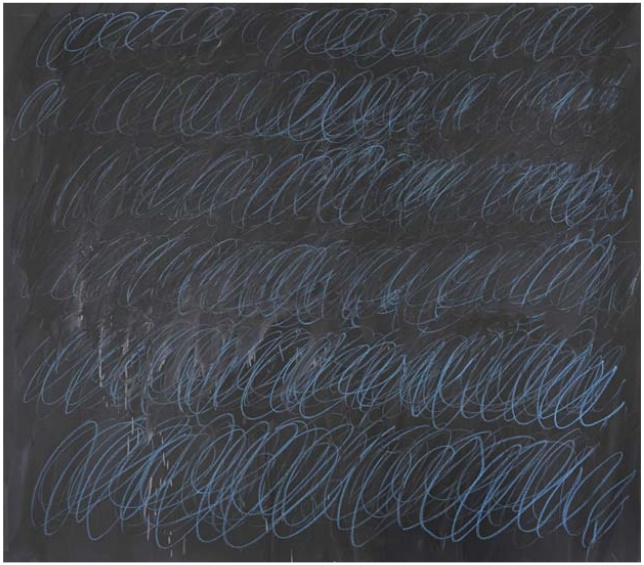 A unique Cy Twombly work from his series of iconic blackboard paintings will lead a forthcoming Sotheby’s sale in New York.
The previously unseen work, ‘Untitled (New York City)’, is the only work from the series executed with blue loops rather than white against a grey background.

The painting was acquired directly from the artist in 1968, soon after it was executed, and has remained hidden in a private collection ever since. It will now head to auction for the first time in its history, where it’s expected to sell for more than $40 million.

"As a unique example from Cy Twombly’s most celebrated series, that boasts unbeatable provenance, and appears at a time of unprecedented auction interest in the artist, Untitled (New York City) is set to be the outstanding highlight of the May series of sales in New York," said Grégoire Billault, Head of Sotheby’s Contemporary Art Department in New York.

Last year Sotheby’s achieved a new auction record for Twombly’s work, when a blackboard painting from the collection of Los Angeles philanthropist Audrey Irmas sold for $70.5 million – marking the second time in 18 months that a work from the series has realized over $65 million.

The Sotheby’s sale will also feature ‘Untitled (Bacchus 1st Version V)’, executed in 2004 as part of a series which defines Twombly’s later period. As the first work from this series to ever appear at auction, it comes with an estimate of more than $20 million.

Further highlights from the sale will include Francis Bacon’s acclaimed ‘Two Studies for a Self-Portrait’, estimated at $22-$30 million; ‘Untitled (P119)’ by Christopher Wool, estimated at $14-$18 million; and Andy Warhol’s 1986 ‘Self Portrait (Fright Wig)’, valued at $7-$10 million.