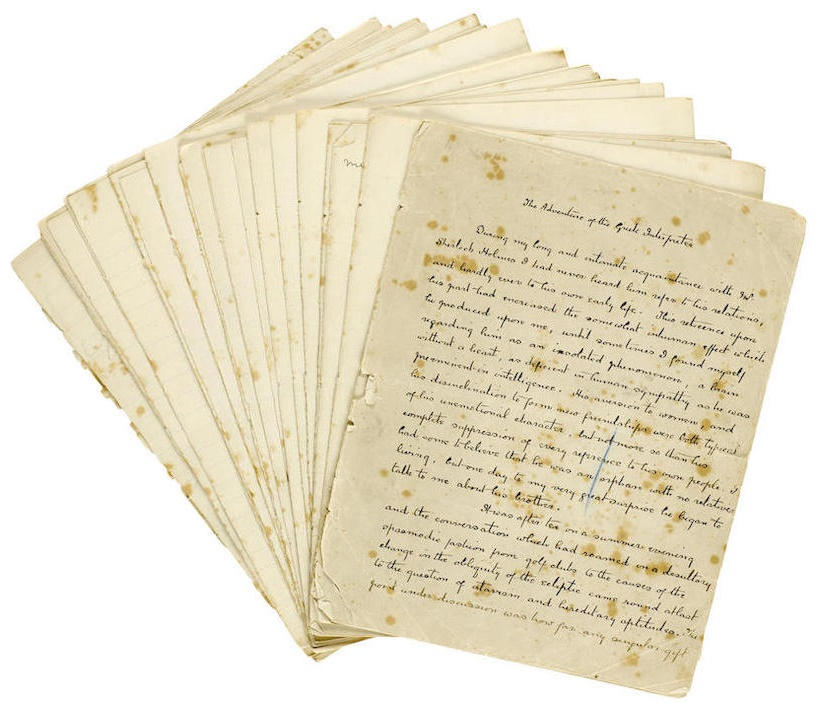 An original Sherlock Holmes manuscript hand-written Arthur Conan Doyle is set to captivate collectors in New York next month.
Written in 1893, the 34-page manuscript tells the story of ‘The Adventure of the Greek Interpreter’, the tale which first introduced the world to Sherlock’s older brother Mycroft Holmes.

Holmes and Watson are called to meet Mycroft at Diogenes Club, an eccentric gentleman’s club, where the elder brother requires assistance for his neighbour, the Greek translator Mr Melas, who was kidnapped under bizarre circumstances.

In the story, Watson learns that Sherlock’s sibling has powers of deduction that may even outstrip his own, but that his inherent laziness prevents him from utilizing those skills.

Holmes tells Watson: "If the art of the detective began and ended in reasoning from an arm-chair, my brother would be the greatest criminal agent that ever lived. But he has no ambition and no energy. He will not even go out of his way to verify his own solution, and would rather be considered wrong than take the trouble to prove himself right."

The story was first published in September 1893 on both sides of the Atlantic, in The Strand Magazine and Harper’s Weekly, and was ranked by Conan Doyle himself as one of his 19 favourite Sherlock Holmes stories. It also remains one of only two stories in which Myrcroft takes an active role, rather than watching leisurely from the sidelines.

The manuscript even features pencil doodles from one of Conan Doyle’s children – either eldest daughter Mary Louise (b. 1889) or eldest son Kingsley (b. 1892) – proving that even history’s greatest authors had to deal with their kids scribbling on their work.

J.K Rowling’s handwritten Harry Potter book could sell for up to £150,000