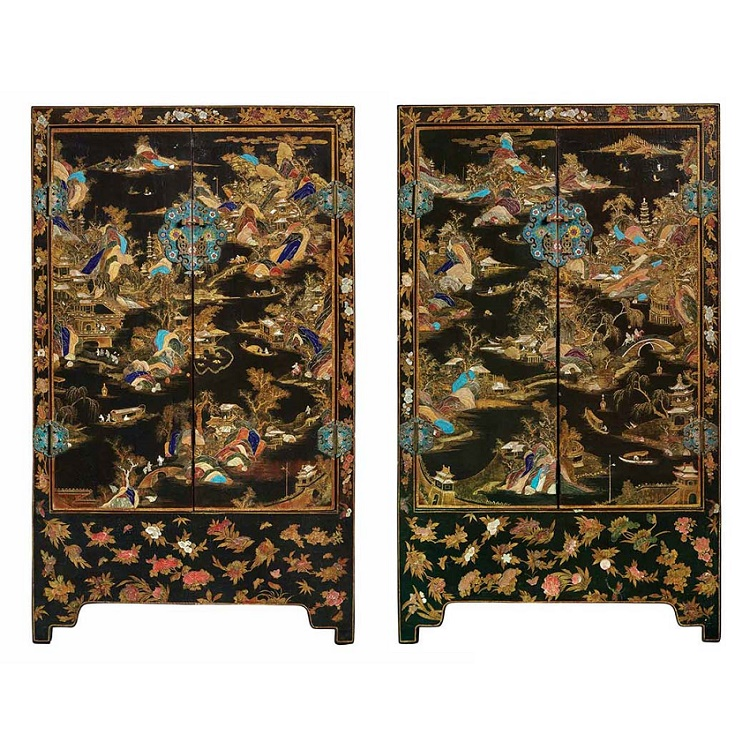 A host of Chinese masterpieces, from furniture to finely carved jade, will light up the forthcoming Asian Art sale at Doyle New York.
Leading the sale will be a pair of elaborately decorated black lacquer cabinets, decorated in gilt and inlaid with hardstones, Peking glass, mother-of-pearl and bone.

The cabinets are known to have originally stood in the British Embassy in Peking, and were formerly owned by Lord Killearn, British Ambassador to China between 1926 and 1933. Now consigned from the estate of collector Walter Kaye, the cabinets are expected to sell for $150,000-$250,000.

Also from Kaye’s collection are a trio of Fahua glazed porcelain Immortals from the Kangxi Period, all seated on lotus bases, valued at $40,000-$60,000.

Further ceramic treasures on offer will include a Qing Dynasty Chinese Famille Rose ‘Millefleurs’ glazed porcelain vase estimated at $30,000-$50,000; a Zhengde mark and period yellow glazed porcelain dish valued at $15,000-$25,000; and a pair of Cloisonne enamel vases decorated with bats in flight, estimated at $8,000-$10,000.

The sale will also offer standout lots such as an exquisitely carved Qing Dynasty bamboo brushpot priced at $30,000-$40,000, and an equally stunning spinach green jade brushpot carved with writhing dragons, estimated at $20,000-$30,000.

Leading the selection of Japanese works is a beautifully crafted, late 19th century,&nbsp; Meiji Period model of a snake. Cast from iron and fully articulated, the realistic 36-inch model is signed Muneyoshi from the Myochin School, and estimated at $50,000-$70,000.

Further Japanese highlights will include a Meiji Period bronze a model of an eagle, bearing the Genryusai Seiya zo seal with spread wings over a root wood perch, estimated at $8,000-$12,000; and a Japanese Katana blade from the Nanbokucho period, attributed to the Enju School, valued at $15,000-$25,000.