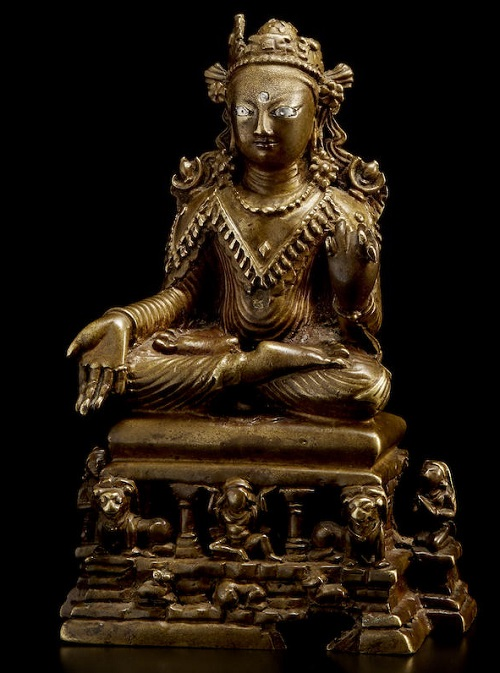 Bonhams has revealed highlights of its forthcoming&nbsp; Indian, Himalayan and Southeast Asian Art sale in New York later this month.
The auction will offer 114 rare and important lots spanning centuries of Asia’s artistic traditions, with a combined estimate of $4-$6 million.

Amongst the leading lots are a grouping of&nbsp; Himalayan paintings, topped by a thangka of Shakyamuni’s Parinirvana from the School of Choying Dorje, the Tenth Karmapa, in eastern Tibet or Yunnan Province, China. Dating from the late 17th century, it depicts “Buddha’s final transition into blissful freedom from rebirth”, surrounded by a crowd of mourners, and is estimated at $100,000-$150,000.

Leading the selection of Himalayan bronze sculptures are two important examples dating back to the 8th century.

Second is a much-published gilt copper figure of Buddha from Nepal, previously exhibited at Asia Society, New York, the Sacramento Museum of Art and the Crocker Art Museum, valued at $80,000-$120,000.
"Bonhams has a reputation for offering distinctive items that maintain a high threshold for taste and quality," said Edward Wilkinson, director of Indian, Himalayan and Southeast Asian Art.

"Our carefully-chosen offering this March is a perfect example. We are proud to have been entrusted with these works, many of which have prestigious exhibition histories. We expect seasoned collectors and connoisseurs will respond enthusiastically."